How Is The Needle moving On This Cotton Related Stock- Namoi Cotton Limited?

Cotton prices have dropped drastically in May 2019 so far; the U.S. Cotton Futures (CTN9) fell from the level of US$79.31 (Day’s high on 9th April 2019) to the level of US$64.51 (Day’s low on 14th May 2019). Although it has corrected till the level of US$67.62 (As on 24 May, 1:45 PM AEST), but it is still lower than the level of US$79.31. The factor which exerted the pressure on cotton prices was the re-escalation in the U.S-China trade war, which in turn exerted tremendous pressure on the American farmers. The trade dispute reduced the demand for Agri-products in China, which weighed heavily on many Agri-commodities in the global market. The low prices of the commodity in the international market dented the income of various cotton industry related player. One such player in the Australian market- Namoi Cotton Limited (ASX: NAM) posted loss amid fall in prices in the financial year 2018/2019. The company recently appointed an interim acting CEO. NAM returned negative returns over the fall and declined return from cotton. 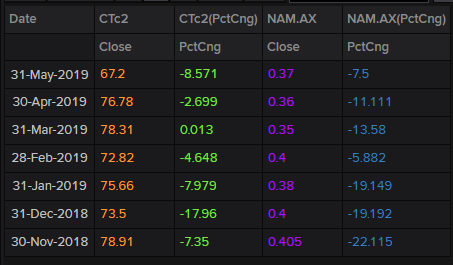 Source: Monthly Return of Cotton, ASX: NAM (Source: Thomson Reuters ) The consolidated net loss after tax from continuing operations was at $556,000 for the financial year ended 28th February 2019, as compared to a net profit of $6,769,000 in the previous corresponding period. The consolidated net profit before tax stood at $124,000 for FY19 ended on 28th February 2019, down significantly as compared to profit before tax of $9,674,000. The company marked a positive operating cash inflow of $21,029,000. 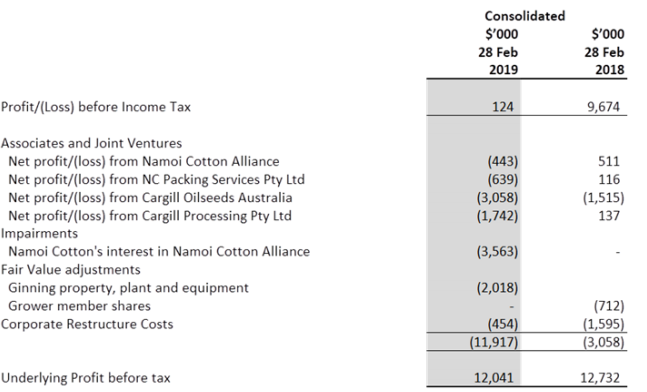 Source: Company’s Report The negative contributions from two of its Joint venture and associated investment also exerted pressure on the operating profit gained by core ginning segment of the company. The lint and packing business of the joint venture of the company- Namoi Cotton Alliance (NCA) marked an operating loss of $443,000 and $639,000 respectively owing to a delay in the lint shipment, which in turn, increased the finance costs and adverse climatic conditions impacting packing volumes. A non-cash impairment of the NCA investment of $3,563,000 also contributed to the consolidated net loss, which arrived due to a formal assessment of the carrying value. The company incurred a non-recurring corporate restructure expense of $454,000 during the financial year 2019 (28th February 2019) in line with restructuring completion. The company did not pay a final dividend for the year ended 28th February 2019. Season Overview: The Australian cotton crop recorded an overall production of 4.5 million bales in the year 2018, which marked an increase as compared to the production of 3.8 million bales in the year 2017. The company ginned 1,202,000 bales of cotton of the 2018 crop (1,105,000 bales of 2017 crop). The shipping business marked trading of 260,000mt of cottonseed in FY19 of the 2018 crop, which was slightly less than the shipping of 266,000mt in the FY18 of the 2017 crop. 2019 Outlook: As per the company’s estimation, the Australian crop is expected to decline significantly to stand at 2.3 million bales in the year 2019. The share of the company increased from the level of A$0.300 (day’s low on 16th May 2019) to the present level of A$0.360 (Day’s close on 24th May).