The fears of production loss from the oil-rich Libya supported the crude oil prices. The prices breached the level of $70 again. The benchmark crude spot (XBR) rose from the level of $69.47 (Day’s low on 5th April) to the present level of $71.09. 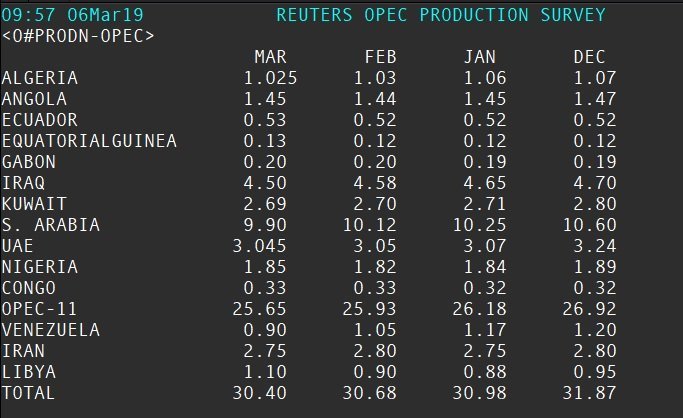 Apart from the voluntary production cut, the United States ban on significant oil exporting countries such as Venezuela and Iran raised further supply concerns in the global market and provided an impetus to the crude oil prices to climb above the $70 from $50 mark.

On the demand side, the mixed conditions in the significant economies are keeping demand steady; however, the supply disruption caused by global events is supporting the crude oil prices.

The North African oil-producing Libya was among the few oil suppliers, which did not reduce the production and the monthly production from Libya rose slowly over the past few months (As seen in the TR table above). However, the recent breakout of civil war between the forces of Khalifa Haftar and Tripoli raised concerns of dampening in the supply chain, which in turn, supported the crude oil prices.

As per the media sources, the military conflict between the forces of strongman Khalifa Haftar broke out on 7th April 2019, when the troops of Khalifa Haftar launched an air strike on a suburb of Tripoli. The UN-backed Tripoli is expected by the market participants to retaliate soon, which in turn, is expected to hamper the day-to-day activities.

The expectation of the market participants of a possible retaliation is in line with the UN response; the United Nations called for an evacuation from the southern outskirts of the capital and declared a truce.

As per the media sources, violent fighting started in the south of the capital between the Khalifa Haftar forces (Libyan National Army) and the forces, which backs the internationally recognised Government of National Accord (GNA). The combat between both the forces raged in Wadi Raba, and an official of GNA forces confirmed that a counteroffensive action is instigated against the Haftar’s Forces.

The civil war is now expected to dampen the supply chain in the international oil market, which in turn is giving a push to the crude oil prices.

To reckon the crude oil prices further, the energy investors are eying on the global events which are responsible for the supply disruption along with OPEC future actions and building U.S. Shale oil production.