Recently, the Company announced its quarterly activities report for the three months to December 2019.

Not just the last quarter, the entire year 2019 was fruitful for the Company with promising results for its core asset in Montney Formation. It all started with Calima-1 vertical well confirming the existence of natural gas condensate after drilling to a depth of 1,872.5m.

Moreover, Calima-2 well-flowing rate delivered top quartile performance against its peer group and right after that Calima-3 well too expected to achieve the same test result, as Calima-2 had garnered positive prospect for CE1.

Also, interestingly, oil saturation values assessed in the Upper and Middle Montney target from the core were up to 59% and 64%, respectively, more than the recorded adjacent value, and superb reservoir properties in comparison to nearby wells have been noticed in Calima's core & logging analyses.

During the year, growth of Calima's asset was backed by increased resources for Calima Lands and grant of pipeline approval. The gross resources value rose to 196.1 million barrels of oil equivalent (mmboe) (2C- Contingent Resource) and 497.3 mmboe (2U- Prospective Resources). The permit was granted for the pipeline with a capacity of up to 50 Mmcf/d wet gas and 1,500 bbls/d of well-head condensate to link the Calima well-pad with regional pipeline and processing infrastructure. 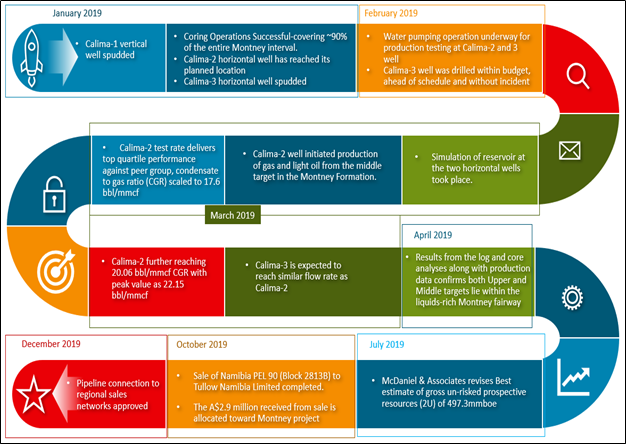 Some of the major updates of Calima during 2019 (Source: CE1 Reports)

The company to support the Montney project sold its Namibia PEL 90 (Block 2813B) to Tullow Namibia Limited in exchange of US$2 million. Moreover, CE1 has access to US$10 million in bonus, subject to the success of PEL 90. The bonus is divided in two equal tranches of US$5 million, following the award of a production licence and then upon the commencement of commercial production.

Also, it is pertinent to mention that CE1 is planning to sell its existing PSCs in Saharawi Arab Democratic Republic and Bahari Shares entirely or partly. The step reflects a continuous focus of the Company towards its premier asset in Montney Formation, which is predicted to become one of the top plays in Western Canada and North America.

The prospect of Calima Lands can be easily gauged with the production of oil from one of its wells at the time of drilling and assays. 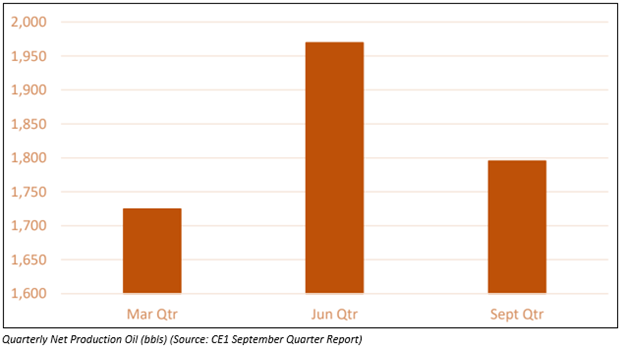 Calima’s past year was very crucial in moulding the project toward commercialisation. And, it would be quintessential to see the upcoming decisions and steps taken in line with high prospect Montney Formation asset in 2020.