Come 2020; it is quintessential to look back to gauge the activity of previous quarter to know the stance against the future plan and accordingly plot the future decision in synergy with the company’s outlook.

In line with the same, on 30 January 2020, Calima Energy Limited (ASX: CE1) announced its December 2019 quarterly update, which has shown noteworthy achievement corresponding to its crucial asset in a super liquids-rich spot of Montney Formation such as:-

Let us now go through the company details and measure how the steps taken during the last quarter are beneficial for Calima Energy.

To know more about the asset and strategy of Calima, please read: Mapping O&G Company, Calima Energy’s Strategy and Initiatives

With this permit, Calima Energy will construct basic amenities from tankage to electric generation metering and a control centre. The offsite construction in a controlled environment will help in achieving cost-effective installation within the winter in an efficient way by placing the final tie-ins on pre-set foundations at the site.

The construction of a 19.5 km steel 8-inch service pipeline will help in connecting the existing and future Calima wells to the Tommy Lakes infrastructure. The Tommy Lakes infrastructure has excess capacity, and CE1 is in talks with the field operator to device an optimal way to use the ability to benefit both parties. Also, it is wise to mention that Tommy Lakes is approaching its end of life and is expected to be on halt after cessation of production in 2020.

The planned pipeline will have a capacity of up to 50 mmcf/d of wet gas and 1,500 bbls/d of well-head condensate to transfer the future production of Calima Lands to the North River Midstream sales line, giving access to the Canadian and US markets to AECO, Alliance and T-North/Station 2. 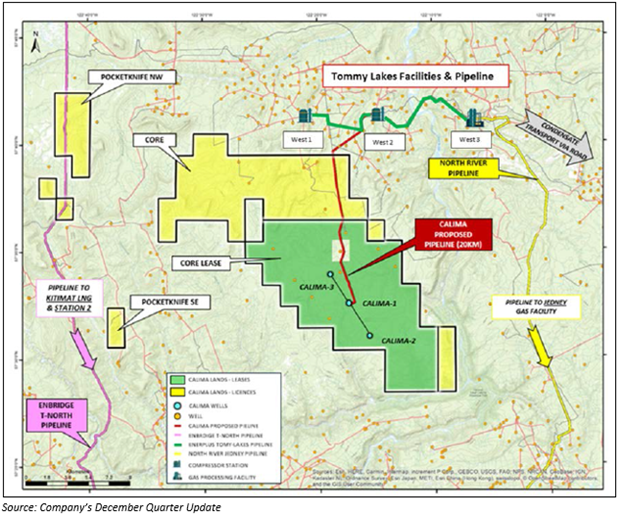 Interestingly, to access the Shell/Petronas’ LNG Canada Facility and the upcoming Woodside/Chevron LNG Facility at Kitimat in the future, interconnects between them are being proposed.

Approval of the 10-year continuation lease frees the company from the obligation to drill further wells until 2029 on the granted acreage of Calima Lands. The permitted leases cover ~56% of the core lands of Calima while the remainder has five years of drilling licence requiring further drilling to enable further conversions and out of these remaining licences, mostly mature in 2022.

However, there were few lands worth 7,542 acres of rights that expired during the December quarter. This is because the areas are expensive to integrate into a Field Development Plan (FDP) due to their shape and separation from the contiguous core area and CE1 aims to let these areas expire in due course of time. If necessary, the company may bid for fresh drilling licences for these lands in future.

The sale represents a strategic move to arrange funds for the development of Calima Lands. CE1 received A$2.9 million from the sale and retained bonus of ~ US$10 million, subject to the success of PEL 90. The bonus is divided equally between two tranches, depending on the grant of a production licence and then upon the commencement of commercial production.

Calima Energy made a new addition to the Board during the December quarter, with Mr Brett Lawrence joining as a non-executive director. He holds 15 years of experience in the oil & gas industry, and performed roles in reservoir engineering, drilling engineering, project development, commercial management, and financial and corporate arenas.

The initiatives taken during the year are in line with move towards Calima Lands’ commercialisation.

The prospect of the Montney project can be easily mapped by referring to the production from one of its wells during the development phase of the projects, and the quarterly gross production of oil in bbls is: - 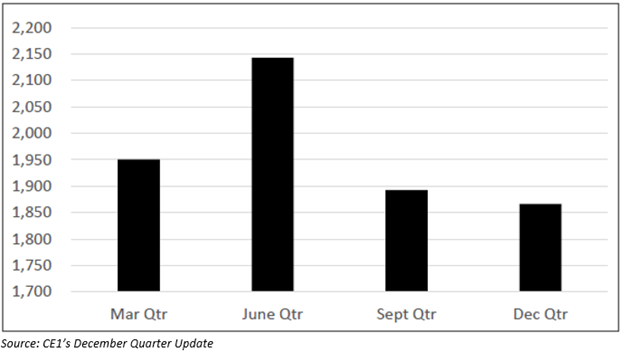 CE1 has ~A$4.9 million in working capital including cash in hand of ~A$3.7 million as of 31 December 2019 and additional fund receivable from Canadian GST worth ~A$1.3 million due in February 2020.

Presently, the company is focusing on advancing the necessary approvals, permitting and authorisations to complete an FDP. The study is essential for promoting the pipeline project, as it offers the foundation for a qualified reserves statement based on which Calima Lands can be endorsed to potential partners and financiers.