Given the above market conditions, we will review two healthcare stocks - Genus PLC (LON: GNS) & Indivior PLC (LON: INDV). The shares of both GNS and INDV were trading down by 0.82 percent and 3.91 percent (as on 14 July 2020, before the market close at 11.42 AM GMT+1), respectively, against the previous day close price. Let's review their financial and operational updates to understand the stocks better.

The Company generated revenue of £270.7 million, which was up by 13 percent on constant currency against H1 FY19. The operating profit excluding JVs and profit before tax increased by 21 percent and 27 percent to £34.4 million and £36.6 million, respectively, when compared with H1 FY19. The Company generated free cash flow of £10.5 million. The Genus PIC business reported revenue of £146.5 million in H1 FY20, which increased by 15 percent on constant currency against H1 FY19. The PIC revenue was supported by restocking in China due to the spread of African Swine Fever. The Genus ABS business revenue increased by 10 percent on constant currency to of £118.0 million, underpinned by strong demand for patented beef genetics. The net R&D expenditure was £30.8 million for the reported period, the expense for porcine and bovine was £12.0 million and £9.7 million, respectively. The net debt of the Company was £107.2 million at the end of December 2019. The Company paid an interim dividend of 9.4 pence per share for H1 FY20, which was up by 6 percent year on year. 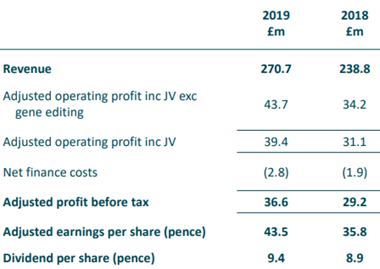 1-Year Chart as on July-14-2020, before the market close (Source: Refinitiv, Thomson Reuters)

The Company expects the currency headwinds, and macro uncertainties would weigh down on the Company's performance in the second half of FY20. The Company is expanding the production capacity of Sexcel; fertility sexed genetics. The Company is working on the beef genetics program that is expected to contribute 25 percent of the total sales of Genus ABS business.

Indivior PLC is a Pharmaceutical Company, which is engaged in the development, manufacture, and sale of prescription drugs. Indivior products include Suboxone film, Suboxone tablet, Subutex tablet, Sublocade injection, Nalscue and Perseris.

The total net revenue declined by 35 percent at constant currency to USD 153 million. The net revenue in the US fell by 48 percent due to the subdued performance of buprenorphine and naloxone generic film products. The net revenue in Rest of the World increased by 26 percent on the back of modest volume growth in Australia and prior revenue adjustment in Canada. The adjusted operating profit was down from USD 102 million to USD 3 million in Q1 FY20, which was due to legal expense and higher marketing expense for SUBLOCADE. The Company reported adjusted net loss of USD 163 million. Indivior had cash of USD 912 million. The patient enrolment for SUBLOCADE and PERSERIS injections declined in mid-March due to the coronavirus impact; however, the SUBOXONE Film continued to do well. Indivior increased the provision for litigation matters to USD 621 million from USD 438 million, which is related to charges of fraud and conspiracy in the marketing of SUBOXONE Tablet in April 2019.

1-Year Chart as on July-14-2020, before the market close (Source: Refinitiv, Thomson Reuters)

The Company has withdrawn FY20 guidance given the challenging economic scenario. Further, the Group would focus on maintaining a constant supply of medicines amid the pandemic. The Company has many medicines and drugs under different phases of regulatory approval or review. The investments and business activity for research and post-development study for few medicines continue to be on track. The Company's short-term focus is to resolve legal matters.