US Market News: The major indices of Wall Street traded in a red zone following a disappointing quarterly result announced by Amazon. Among the gaining stocks, Procter & Gamble (PG) shares grew by about 2.47% after the Company posted impressive quarterly figures. Chevron (CVX) shares went up by around 0.12% after the Company had reported quarterly adjusted earnings more than the consensus estimates. Among the declining stocks, Amazon.com (AMZN) shares fell by about 6.89% after the Company’s quarterly revenue had missed the Wall Street forecasts. Caterpillar (CAT) shares dropped by about 3.25%, despite the Company reported second-quarter revenue and earnings more than the expectations.

UK Market News: The London markets traded in a red zone after the weak performance of the mining and airlines stocks.

Babcock International Group shares plunged by about 16.02% after the Company had widened the full-year loss because of the impairment charge of 2 billion pounds.

Natwest Group shares dropped by around 1.22%, even after the Company resumed dividend payments and announced a share buyback programme.

Intertek Group had shown a decent increase in the first-half profits. However, the shares fell by around 7.29%.

International Consolidated Airlines Group shares plunged by around 7.56%, even after the Company narrowed down the operating loss for the first half of the current fiscal year. However, it remained cautious regarding the Covid-19 uncertainty. 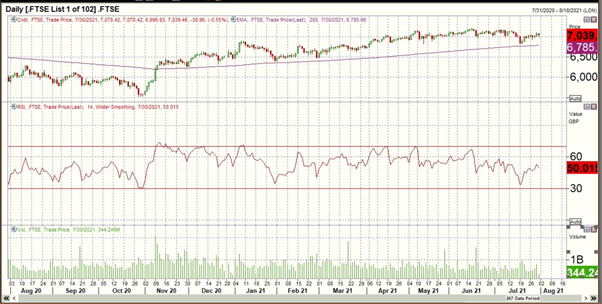