SSP Group PLC (SSPG) is a London-headquartered international operator of food and beverage concessions with operations in 33 countries and more than 500 brands in its portfolio. The group has a presence in airports, train stations, motorway service stations and other locations, where it operates and owns restaurants, bars, cafes, food courts, lounges and stores, which is complemented by a substantial experience of the local market to respond to the specific needs of customers. The group sets up the local supply chain to source good quality products to deliver both local and international brands and brings operational expertise in a challenging environment to ensure customer service is exceptional to serve approximately 1.5 million customers daily. The operations of the group are differentiated in four operating segments, namely the UK, Rest of the World (RoW), North America and Continental Europe.

For the period from 1 July to 30 September 2019, the company reported that the trends seen in like-for-like sales growth in the third quarter continued into the fourth quarter, and it expects revenue to increase by approximately 7.8% on a constant currency basis, comprising net contract gains of approximately 6.0% and like-for-like sales growth of approximately 1.8%. Driven by newly commenced operations in Brazil and significant growth in North America and Continental Europe, net contract gains for the full year are expected to be just above the previous expectations of 5.5%. In the fourth quarter, revenues for the period are expected to increase by approximately 10% year-on-year at actual exchange rates, and overall impact on revenue from the foreign exchange during the full year 2019 compared to the 2018 average is expected to be around 1%. Due to slower passenger growth and the impact of airport redevelopment, like-for-like sales continued to be held back in Continental Europe, while rail has remained softer in the UK and air sector has been fairly resilient over the fourth quarter. 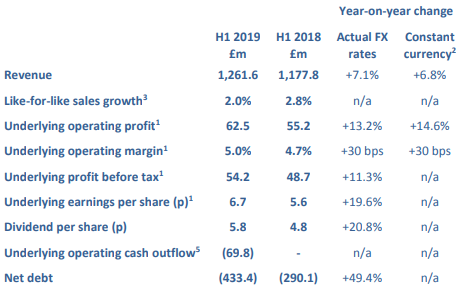 As like-for-like sales in the air sector grew more strongly than in rail driven by the continued growth in air passenger numbers, first half revenue increased by 6.8% on a constant currency basis, comprising the impact of acquisitions of 0.7%, net contract gains of 4.1% and like-for-like sales growth of 2.0%. Despite the impact of higher preopening costs arising from the significant new contract opening programme, solid like-for-like sales growth and the continued roll-out of its strategic initiatives helped the group to report underlying operating profit of £62.5 million, an increase of 14.6% on a constant currency basis. Reflecting an adjustment for the amortisation of acquisition-related intangible assets of £0.9 million (H1 2018: £1.0 million), operating profit during the period was £61.6 million, on a reported basis (H1 2018: £54.2 million). Gross margin on a constant currency basis increased by 90 basis points year-on-year, while underlying operating margin rose by 30 basis points to 5.0%. Reported profit before tax was reported at £51.4 million while underlying profit before tax was up by 11.3% to £54.2 million. Reported earnings per share were 6.1 pence per share (H1 2018: 5.6 pence per share) and underlying earnings per share rose by 19.6% from 5.6 pence per share in the first half of FY 2018 to 6.7 pence per share. In line with the policy of maintaining the pay-out ratio for the full year at 40%, the group declared an interim dividend of 5.8 pence per share (H1 2018: 4.8 pence). The group reported an underlying free cash outflow of £75.9 million, which was £69.4 million higher than the first half of 2018, and it generated underlying net cash flow from operating activities of £57.3 million (H1 2018: £91.8 million).

In the latest trading update, the group kept its guidance for the financial year unchanged and reported that on 20 November 2019, results for the year ending 30 September 2019 are expected to be released. The group faced many external challenges and said that it expects these challenges to remain. However, it is well placed to benefit from the significant structural growth opportunities in its markets, benefits from the diversity of the business and flexibility of the model, along with growing global presence, particularly in North America and Asia.

Gear4music Holdings PLC (G4M) is a York, United Kingdom-headquartered largest online retailer of musical instruments and music equipment in the country which sells own-brand musical instruments and music equipment alongside well-known premium brands to musical enthusiasts and professionals. The group operates 20 websites in 15 languages and 9 currencies and retails over 51,500 SKUs across all major musical instrument and equipment categories to offer a wide range of products across for musicians of every proficiency. The operations of the group are differentiated in two geographical segments, namely the UK and Europe & Rest of the World.

The company will report interim results for the six months ending 30 September 2019 on 12 November 2019, and it continued to trade in line with its full-year EBITDA expectations as the group heads toward its seasonal peak. The company is confident of achieving a sustainable level of profitable growth and believes it would be able to make the most of the opportunities available to it, helped by the capacity and efficiency required for it. It has implemented a number of commercial and operational initiatives, and it continues to see a significant opportunity to continue to win market share.