What are payday loans?

Payday loans are short term loans that usually involve high interest rates. They are usually due on the forthcoming payday of the borrower. These loans are high cost loans that are riskier than other covered loans. The borrower may not be asked to provide collateral in exchange for a payday loan.

People usually take payday loans when they are short on money to get through the month till their payday. Even though these loans involve small amounts, they are very expensive, and, in some cases, the most costly loans offered.

Non-bank institutions offer these loans. Companies may offer payday loans to those people who have difficulty making ends meet. If consumers start becoming dependent on these loans to get through the month, then the company would benefit hugely.

How does a payday loan work?

Payday loans are offered online or through a physical payday lender. The laws governing payday loans might be different for different countries. The limits on how much can be borrowed or lent and how much interest can be charged are different between states as well.

The borrower must request the amount of loan, once the request is accepted, the loan is granted. The payday loan can be rolled over to the next month in case the borrower is unable to pay. However, since the interest charged on payday loans if excessively high, the cost keeps on accumulating. The rollovers may be limited in certain areas.

What are the advantages of payday loans? 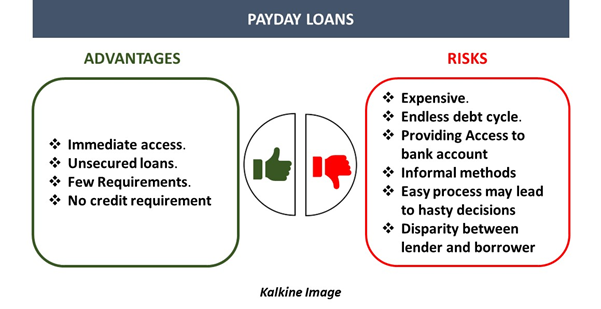 What are the problems associated with payday loans?

Despite all the advantages offered by payday loans, it is important to note that these loans are much riskier than traditional loans and can be extremely hard to repay if they accumulate over time. Some major issues with payday loans are:

What are the alternatives to payday loans?

Payday loans are usually highly discouraged. They are not seen as frequently and might be more popular in the regional areas. There are various methods with which payday loans can be avoided. This includes improving upon the credit score and building a credit history to be eligible for traditional loans.

A great alternative would be to save from one’s salary and keep an emergency fund ready for the case of an emergency. If one job does not suffice the financial requirements, then having a side job for weekends can also be an effective solution.

Many people start peer-to-peer lending system that do not have very high interest rates. This can be done by pooling in a certain amount into an emergency fund, and each member taking a loan from the money collected by them. This is a local alternative that would ensure there is no exploitation of borrowers. It is always better to go for a secured loan, as usually secured loans have lower interest rates.

Why were these ASX All Ordinaries shares in focus this week?

One of every 7 people holds over 20 BNPL debts in Australia: Survey

How are big 3 banking stocks faring on NZX?