What is a Mortgage-Backed Security?

Mortgage-backed securities are investments backed by homeowner’s mortgage payments. The return on these securities is a percentage of the principal and interest payments associated with them.

Such securities come under asset-backed securities. They can only be as functional as the assets that back it up. This was evident in the 2008 housing market crisis where poorly backed securities were falsely sold as high-grade investments.

How do mortgage-backed securities work?

Mortgage loans can be purchased from the banks, mortgage companies and other lenders of such loans and then assembled into pools by either governmental or private institutions, or a mix of both. These institutions then release securities holding claims on the original set of mortgage loans.

These claims entitle the buyer to a certain amount of the interest and principal amount repayments made by the borrowers of the underlying pool of loans. This process is called securitization.

The bundle of mortgages made by the institution should be made in line with loans having similar interest rates. These bundled securities are called Special Investment Vehicle and are kept separate from a bank’s existing operations.

People can trade into MBS with the help of a broker who can place an order on their behalf. MBS can be purchased physically or through online orders.

How did mortgage-backed securities come to light?

Mortgage-backed securities date back to 1986, when the first security of such kind was issued by Fannie Mae. These securities gained recognition in 1977 when Lewis Ranieri, who was a bond trader at Salomon Brothers, was trying to find an answer to why banks were not giving out as may mortgages as they used to.

It was found that the long repayment period combined with lower interest rates repayments made it harder for banks to pay higher interest rates on deposits spread out over shorter periods. Thus, issuing mortgages became difficult for banks.

Consequently, the idea of 5-year and 10-yeaar bonds backed by interest and principal payments came to light. The concept of MBS had been put into action by mortgage investors like Fannie Mae, Freddie Mac, FHA and VA. The new security class allowed investments to be made over shorter time frame. Thus, investors were drawn to the idea and MBS investing took off.

What are the different types of mortgage-backed securities?

Depending on the type of investment made, mortgage-backed securities can be divided into 2 types:

These were developed in early 2000s, to attract investors. CMOs are more complicated investment instruments than the firmer as they are a combination of different securities. The CMO tranches are made based on the level of risks associated with them. 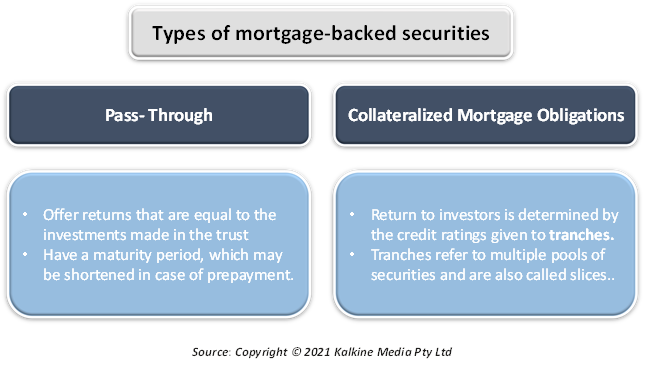 What kind of institutions issue an MBS?

The underlying mortgage must be issued by a regulated and authorized financial institution. Additionally, the MBS must be given either of the top two ratings by an accredited credit rating agency.

What is the impact of Mortgage-backed securities on various markets?

The MBS also liquidated the housing loan market. When banks were struggling to provide loans to a higher number of customers, MBS allowed them to capitalize on ongoing loans. These ongoing loans fetched the banks with enough capital for them to start issuing more loans to newer customers.

What are the benefits of Mortgage-Backed securities?

For investors, MBS acts like bonds with known returns along with lower risk of losing money as compared to the stock market. These are a much safer form of investment compared to investments in equity, commodity, etc.

The safety of these investments becomes even more pronounced when the MBS is government backed. For instance, in the United States, securities bought through Ginnie Mae are directly backed by the government.

Similarly, Fannie Mae and Freddie Mac, which are privatized enterprises under government conservatorship since late 2008 are safer investment options than stock markets. Thus, most MBS come with a greater level of guarantee than other investments. Also, in case of a foreclosure of a loan, the investor must be repaid thoroughly by the bond issuing agency.

However, the MBS that are not backed by government agencies are riskier investments. Investing in these securities can be detrimental to the investor as they may not be repaid in the case of foreclosure of loans.

It is also important to note that any dips in the housing market would be accompanied by a boost as houses would never go out of demand due to the ever-lasting need for a roof over one’s head.

What are the risks attached to mortgage-backed securities? 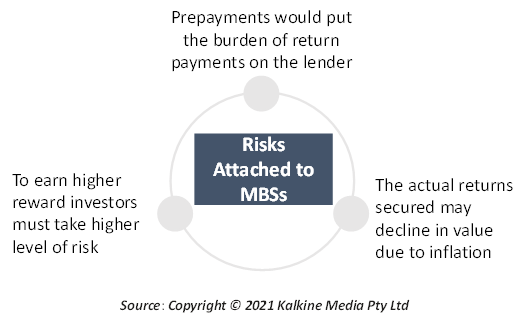 What was the role of MBS in the 2006 housing market crisis?

During early 2000s, it was compulsory for every bank in the United States to exercise due diligence before lending money for a mortgage. Banks made it a point to check the financial stability of the borrower including income, debt, credit rating.

After the introduction of mortgage-backed securities, the process of conducting due diligence changed. The most qualified customers with the highest credit rating had already invested in homes and had ongoing mortgages with various banks. This led to banks turning towards subprime borrowers to lend mortgage loans to.

This led to the development of no-document loans which did not require any information or background check. This was backed by the issuing of the MBS, which made the banks more secured about loan repayment. Initially the MBS performed well as they were backed by good quality loans issued to borrowers with higher credit ratings. As loans progressed towards borrowers with lower credit ratings, the structure of the MBS started to crash.

More and more complicated Mortgage-backed securities started were issued by banks with underlying subprime mortgages. These subprime mortgages held the risk of default as the borrowers did not hold adequate level of credit ratings.

The collateralized mortgage obligations further complicated the scenario. These complex securities were made with tranches of securities which had further been made from subprime mortgages. These were riskier, however, they offered higher return in exchange for the high risk associated with them. At the same time borrowers of the underlying subprime loans were asked to pay higher interest rates due to the increased risk of default.

This ultimately led to them defaulting on their loans, which mandated the banks to seize the houses of these borrowers. Thus, there was an oversupply of houses in the market. This took a turn for the worse as people found themselves paying mortgages for houses that were priced much lower in the market. This happened due to increased number of houses on sale, which led to a drop in the value of houses.

There was crash across banking, housing and investment banking space leading to overall economic recession.

How popular are MBS today?

The crisis of 2008 led to a decline in the popularity of mortgage-baked securities. However, MBS have resurfaced and are still bought and sold in markets. The pretext is simply the fact that people generally repay their mortgages.

Additionally, many new rules and regulations have been put into place following the 2006 crisis. These have strengthened the financial sector and have provided greater security to MBS issuers in case of a loan default.

Under the new rules, these securities must provide disclosure to investors which has led to lesser MBS being issued apart from the ones issued by Fannie Mae and Freddie Mac. The economic slowdown in 2008 and beyond was a proof of how interconnected each sector of an economy is and the extent of a domino effect one mistake can have on the overall economy.

The crash of the market has led to the realization that MBS are more interconnected than had been previously thought by investors, banks, and other financial institutions alike.

Thus, mortgage-backed securities are risky investments and must be carefully investigated. Only government backed securities should be invested in. In the United States such guaranteed securities are issued by Fannie Mae, Freddie Mac and Ginnie Mae. This is done to promote the mortgage industry so that a greater number of people can become homeowners and the housing market always remains liquid.

How will these 5 NZX financial stocks perform as inflation hits a 30-year high?

Why IQONIQ (IQQ) fan token has taken a sudden hit?