What is the Lorenz curve?

Lorenz curve is a graphical representation of the inequality in wealth that exists in the society. It is used in economics to display the spread of income. Lorenz curve was given by Max Lorenz in 1905.

How can one understand the Lorenz curve? 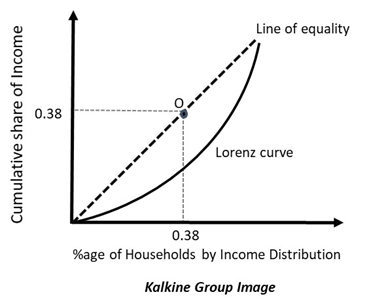 In the diagram above, the 45-degree line depicts the line of perfect equality. All points on this line depict those allocations where individuals earn equitable level of income and there are not any outliers.

However, the Lorenz curve that exists in real-life economies can not be equal to the line of equality as it is highly unlikely that countries are free of poverty. Thus, the straight line is more like a point of reference than an actual Lorenz curve. 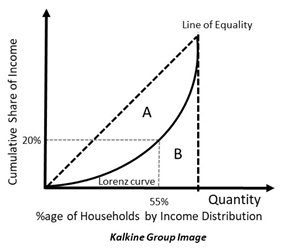 This is the reason why Lorenz curve is different from the 45-degree line. There can never be equitable distribution of wealth in real life.

What is the Gini Coefficient?

Graphically, Gini coefficient refers to the proportion of the area that exists between the 45-degree line and the Lorenz curve, and the entire area lying below the line of equity. Consider the following diagram: 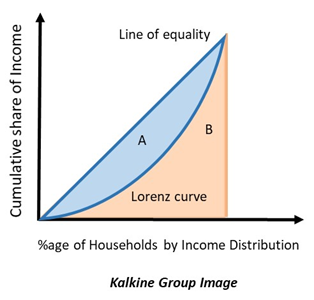 The proportion of area A to the combined area A+B is the Gini Coefficient. If there is greater inequality, then Gini coefficient will be higher as the Lorenz curve would lie farther away from the Line of equality. Thus, area A would be bigger.

The Gini coefficient is an easy way of comparing the inequality that exists between countries. It assigns a number that is universally accepted, irrespective of the population base of countries. It is one of the most prominent measures of inequality worldwide.

Both Gini coefficient and Lorenz curves are used to measure inequality in the society. There are other measures as well like Atkinson’s inequality measure, Hoover index, Palma ratio, etc.

What are the advantages of Lorenz curve?

Lorenz curve is one of the simplest representations of inequality in the economy. It is a visual depiction of inequality and it can be easily understood. This allows it to be used as a measure of comparison across economies, even if the economies differ in the size of population.

Lorenz curve is plotted with the help of the numerical data given on an economy. Thus, it utilises statistical data and provides a visual touch to it.

What are the disadvantages of Lorenz curve?

Despite its many advantages, like most measures, Lorenz curve is not perfect. The limitations of Lorenz curve are the following:

Why does the Lorenz curve not converge into the 45-degree line even in developed countries?

Even advanced countries do not have a 45-degree Lorenz curve. In fact, it has been observed that their Lorenz curves are moving in the opposite direction. It is important to note that being a wealthy nation does not mean that the wealth is distributed equally.

Usually, it is observed that the top 10% or 20% of the income earners hold a large proportion of national wealth. This means that most of the wealth in a nation is held by a few select individuals who are rich. This gap between the rich and the poor has been widening despite the technical advancements and the increase in global wealth.

There is still a demand for workers who are highly skilled. Thus lower-skilled workforce must compete with them, which ends up hurting their case. This is why the poor population is further pushed away from equality.

What Is An Inverted Yield Curve, And How Does It Predict A Recession?