What is Economic Depreciation?

Economic depreciation refers to a decrease in the value of an item or an asset over time. The decline in value reduces the price of the asset in the market. Assets generally get depreciated because of the wear and tear.

Economic depreciation becomes more visible as time passes or as external factors change. This leads to a reduction in the market value of the asset. In such cases, if the assets are resold, they fetch a lower amount compared to what was paid to acquire them.

How is economic depreciation recorded in the system of national accounts?

Economically, depreciation is recorded as the reduction in income owing to the loss in value of capital. Depreciation is also known as the “Consumption of Fixed Capital” for this reason.

There are two significant elements that lead to the decline in value of an asset:

Together, these two factors affect how prices of a good change with time. However, in a strict sense of the term, depreciation may only account for the second factor.

Why do assets depreciate?

Assets may depreciate because of the normal process of ageing or because of certain external factors. These include: 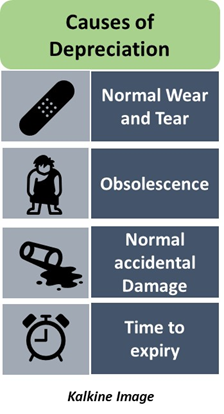 How is economic depreciation calculated?

There are two methods of measuring depreciation. These are:

How does depreciation affect the capital stock in an economy?

When depreciation is reduced as a proportion of capital stock, then the capital stock in the next period is calculated as follows:

Where Kt+1 refers to the capital stock in the next period,

Kt refers to the capital stock in the current period,

δ refers to depreciation, and,

It refers to the level of investment in the economy.

When depreciation is taken as a constant value that is not proportionate to the existing current stock, then the next period capital stock is calculated as follows:

The meaning of the variables remains unchanged.

Why is Fortescue (ASX:FMG) in news these days?