Canada’s CPI climbed 7.6 per cent year-over-year (YoY) in July, a deceleration from the 8.1 per cent increase seen in June, according to the latest inflation report. The agency said that this slowdown was mainly driven by lesser growth in gasoline prices (which rose by 35.6 per cent YoY in July compared to a 54.6 per cent jump in June).

Grocery prices continued to increase with a 9.9 per cent surge in July. Elevated wheat prices fuelled bakery product prices to grow by 13.6 per cent this month. Due to higher demand for flights, airfare also increased by 25.5 per cent, while prices of food purchased from the restaurant rose by 7.3 per cent in July.

In the light of these latest inflation report, Kalkine Media® have selected some TSX stocks that one can explore in the long term.

Loblaw Companies has diversified retail operations. It opened Pharmacist Walk-in Clinic in Lethbridge this year to provide access to primary healthcare services, which was exacerbated by the COVID-19 pandemic.

The C$ 39-billion market cap retailer posted revenue of C$ 12.84 billion in the second quarter of fiscal 2022, up by 2.9 per cent relative to Q2 2021. This revenue growth came as the retail segment noted a sales increase of 2.8 per cent year-over-year (YoY) to C$ 12.62 billion in the latest quarter. On the other hand, e-commerce sales dropped by double-digit, 17.5 per cent, in the second quarter of this year.

The L stock gained nearly 16 per cent year-to-date (YTD). The large-cap retail stock jumped by over 38 per cent in 12 months. According to Refinitiv data, Loblaw stock seems to be on a moderate trend, with a Relative Strength Index (RSI) value of 57.57 on August 15.

The large-cap consumer packaged goods (CPG) company said that prices of international cheese and dairy ingredients were favourable. Saputo will deliver a quarterly dividend of C$ 0.18 on September 16.

The SAP stock rose by over 31 per cent in three months. According to Refinitiv findings, Saputo stock held a high RSI value of 69.08 on August 15, which typically denotes a high momentum. 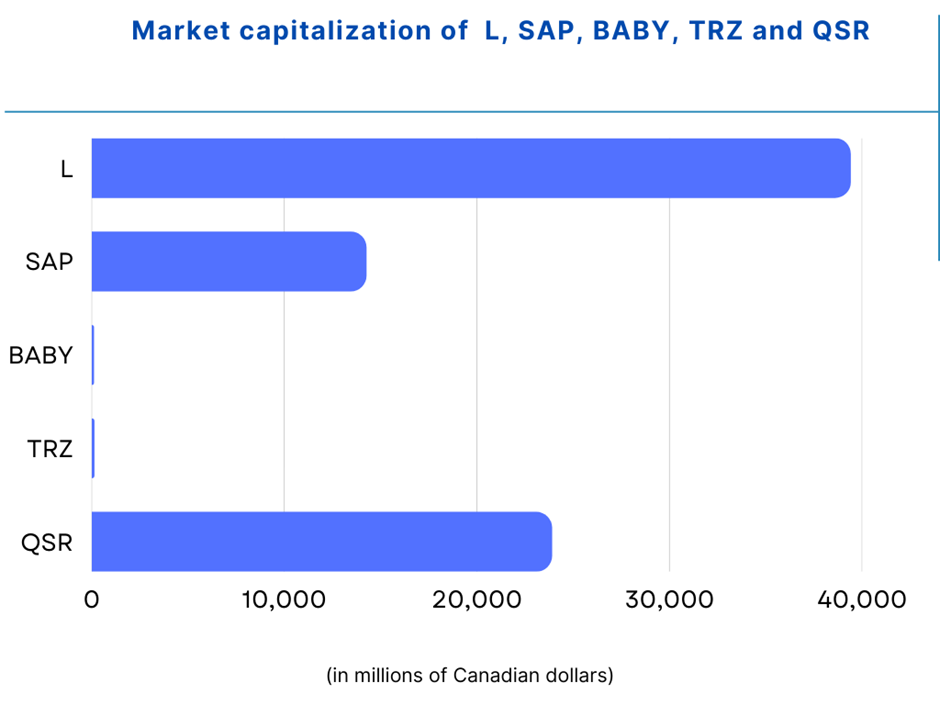 Else Nutrition saw its scrip spike by nearly seven per cent to end the session at C$ 0.92 on August 15, after releasing its financial results for Q2 2022. Else reported a revenue surge of 44 per cent to C$ 2.3 million in the latest quarter compared to the second quarter of last year. The baby food and nutrition company said that this top-line growth was mainly due to expanding its toddler products throughout all channels and introducing the Toddler Omega product. Else Nutrition highlighted that its sales on Amazon.com swelled by 84 per cent YoY in the latest quarter.

The BABY stock zoomed by over 53 per cent quarter-to-date (QTD). As per Refinitiv information, Else Nutrition stock held an RSI value of 71.96 on August 15, denoting a bullish trend.

Investors can explore cheap airline stocks like Transat with reportedly increased air travel demand. This Canadian airline said on July 29 that it came into an agreement with Canada Enterprise Emergency Funding Corporation (CEEFC), under which it secured additional funding of C$ 100 million to overcome pandemic effects.

Depreciation and amortization expenses also surged to C$ 36.49 million in the latest quarter relative to C$ 35.27 million a year ago.

The TRZ stock zoomed by nearly six per cent in one month. As per Refinitiv information, Transat stock saw an RSI value of 53.79 on August 15.

Restaurant Brands was among the top consumer goods companies based on the largest price gains in the past 30 days, as per the TMX site. The restaurant chain operator said its consolidated system-wide sales increased to US$ 10.07 billion in Q2 2022 compared to US$ 8.9 billion in Q2 2021. The system restaurant count at the end of Q2 2022 also grew to 29,747 compared to 27,403 in the second quarter of 2021.

Restaurant Brands reported total revenues of US$ 1.63 billion in the latest quarter, higher than US$ 1.43 billion in Q2 2021.

The QSR stock swelled by almost 21 per cent QTD. Restaurant Brands stock seems to be on a bullish trend with a high RSI value of 78.13 on August 15, according to Refinitiv data.

As prices of groceries, restaurant food and air travel continue to increase, Canadian investors aiming to benefit from such price movements can explore the TSX stocks.