After declining by 1.5 per cent on election day, the S&P/TSX Capped REIT Index jumped by one per cent and clocked the day high of C$ 200.11 on Tuesday, September 21. The surge indicates that the investors are not concerned about Liberals forming the minority government.

Before the elections, the Liberal Party of Canada had pledged that they will focus on making homes affordable and target the real-estate frenzy. The Liberals had also indicated during their campaign that they would do something about the expensive rents charged by some Real Estate Investment Trusts (REITs).

As homes are becoming increasingly unaffordable for Canadians, the government wants to bring new policies to restrict the country's larger landlords from making excessive profits. It is alleged that some REITs aim to grab large portfolios of Canadian rental housing and that will put upward pressure on rents.

Why are REITs rallying?

As the election result is almost similar to the outcome of the 2019 general election, it seems investors are not worried about any drastic change in policy around the real estate sector. Also, rent controls fall under the jurisdiction of provincial governments, so the federal government has very little scope of doing something on this front.

Also Read: Time to move on and address these economic challenges, Mr Trudeau? 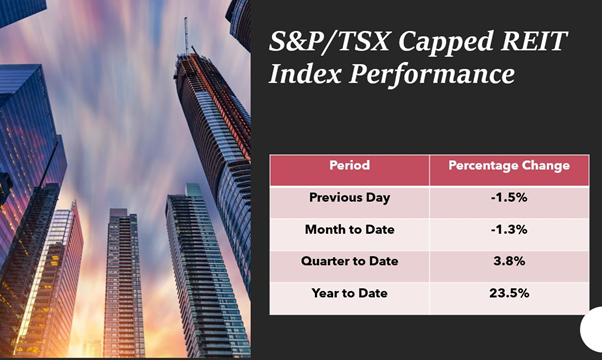 REITs have performed significantly in 2021. The S&P/TSX Capped REIT Index has surged by 23.5 per cent year-to-date (YTD) and about four per cent quarter-to-date (QTD).

Also Read: What's next for Canadian real estate as Trudeau wins without majority?