Over the past few years, fashion retailing industry across the globe has undergone a magical transformation, backed by customers’ emphasis on fashion. Shift in consumer behaviour, technological advancements and emergence of online platform are among the various factors that are transforming the industry.

Fashion retailing serves as an intermediary between manufacturers and customers. Let us discuss two fashion retailers - Noni B Limited and City Chic Collective Limited, which are listed on ASX and focus on women's fashion products.

As a ladies’ fashion retailer, Noni B Limited focuses on superior service, style and fit. The retailer grew from two stores in Belmont and Swansea in the Australian state of New South Wales to more than 200 stores across the country. 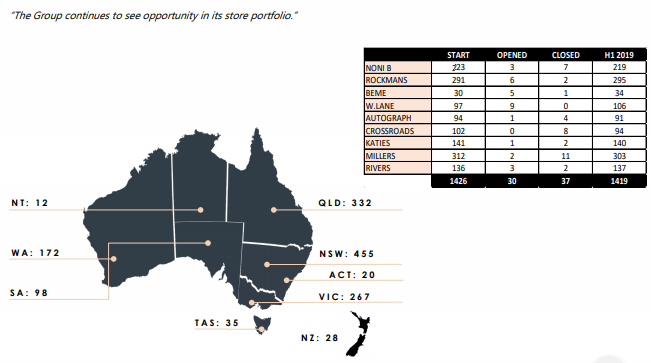 During the period, the retailer’s online sales as a proportion of total sales continued to grow and accounted for 9.8% of its total sales. Its like-for-like sales were in line with the management and integration plan expectations, reaching -4.3%.

Owing to all these figures, which are preliminary and subject to finalisation and review by its auditors, Noni B expects to report $ 45 million in underlying earnings before interest, tax, depreciation and amortisation (EBITDA) for the financial year 2019, up circa 21% year-on-year from $ 37.2 million registered during the same period a year ago. The estimated underlying EBITDA is in accordance with the retailer’s guidance.

The retailer expressed its content towards NBL’s performance during the year, specifically the sales performance through the key trading periods of Christmas and Mother’s Day.

During the month of May, Noni B announced Jacqueline A Frank as a Non-Executive Director of the company. Holding a deep understanding of the Australian retail and fashion sector, Jacqueline is expected to make valuable contributions towards the company’s goal of becoming one of the pre-eminent women’s apparel retailers in the country, Richard Facioni, Chairman of Noni B, commented on the new director appointment.

NBL gave its investor presentation for the first half of 2019 in February 2019, under which the company discussed its trading performance, 2019 half year review, integration & growth plan, online growth, and other aspects of its business.

Figure below depicts the company’s performance during the first half of FY19. 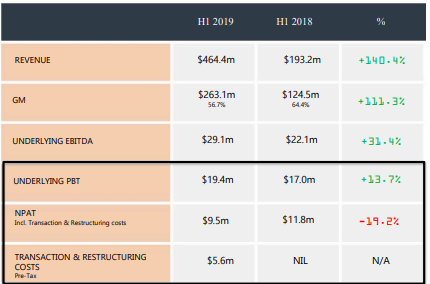 Targeting sizes 14-24 and women aged 18-35, City Chic Collective Limited is a premium brand, which caters to its customers in more than 200 global locations. The company has partnerships with designers including Ed Hardy and Damn You Alexis. The multi-channel retailer got listed on ASX in May 1998 and is headquartered in the Australian state of New South Wales. 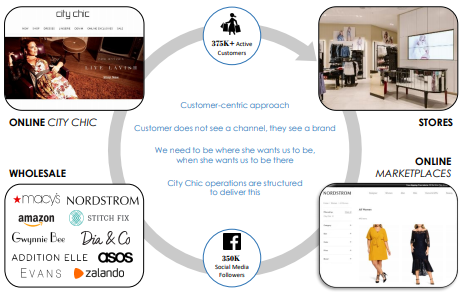 In late June 2019, City Chic updated the market that independent experts have favoured the sale of its Millers, Katies, Crossroads, Autograph and Rivers businesses in July 2018. The experts were in discussions concerning the post completion limited working capital adjustment under the business sale agreement for the sale.

The company will finalise the completion adjustment, in addition to other non-recurring expenses associated with the divestment, under the net profit after tax from discontinued operations for the financial year 2019.

Additionally, the company expects to report underlying earnings before interest, taxation, depreciation and amortisation (EBITDA) from continuing operations for FY19 in line with analyst consensus. Its underlying EBITDA is anticipated to be in the range of $ 24 million - $ 25 million.

The company reported that its online sales channel accounts for 40% of the total sales and is the most profitable channel, while its Bricks and Mortar business contributes towards half of total sales. 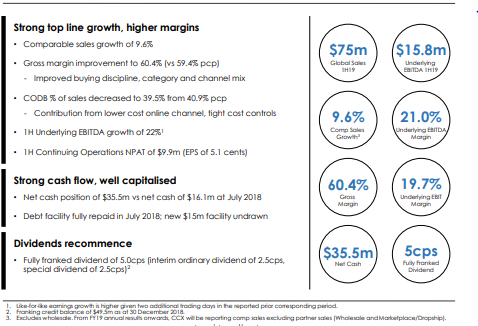 City Chic plans to focus on boosting its global presence. The company intends to grow its website in the United States by offering new lifestyles and broader range, as well as focusing on targeted customer acquisition and improved customer touchpoint. It plans to enter into new partnerships with entities in the United States and Europe / UK, as well as explore new disruptive retail models and collaboration opportunities, as part of its continued efforts towards growing its international presence. Additionally, the company will continue European trial through wholesale.