GGG’s wholly owned project leverages from unique and highly advantageous strengths like massive bulk resources, mostly outcropping, year-round direct shipping access and ores that are conducive to simple, cost-competitive processing. Owing to these, Kvanefjeld is likely to emerge as a long-life, low cost, and large-scale producer of RE elements.

On 9 July 2020, Greenland Minerals revealed that production of by-products from Kvanefjeld may deliver economic and environmental benefits. This further ensures that Kvanefjeld is likely to be one of the lowest-cost, globally significant producers of RE.

Per annum, by products are expected to generate USD 60 million in revenue for Kvanefjeld. This could in turn reduce cost of producing REs by ~ USD 1.90 per kg of RE, or 40% of the cost of producing a RE intermediate product in Greenland, according to GGG.

Once developed, Kvanefjeld is likely to be one of the largest producers of RE globally, producing in excess of 30k tpa of rare earth oxide (equivalent) in an intermediate product. This product may comprise of extremely significant quantities of critical magnet REs- neodymium, praseodymium, terbium as well as dysprosium.

GGG expects Kvanefjeld to recover a series of by-products during production of RE intermediate product and produce commercially significant quantities of uranium oxide, zinc concentrate, and fluorspar.

It should be noted that while incremental cost of by-product recovery remains low, by-product revenue generated contributes to lower production cost of RE. Besides, recovery of by-products has the effect of removing environmentally adverse elements from Kvanefjeld Project’s tailings streams. This translates into a possibility of reduction of the Project’s overall environmental impact.

Now that the economic and environmental benefits of Kvanefjeld have been highlighted, let us gauge upon the by-products of commercial significance likely to be produced-

Uranium oxide, zinc concentrate, and fluorspar are by-products that can be recovered during the production of the RE intermediate product from Kvanefjeld. Availability of these in commercially significant quantities make them a lucrative recovery for Greenland Minerals, while they contribute towards the environment positively. 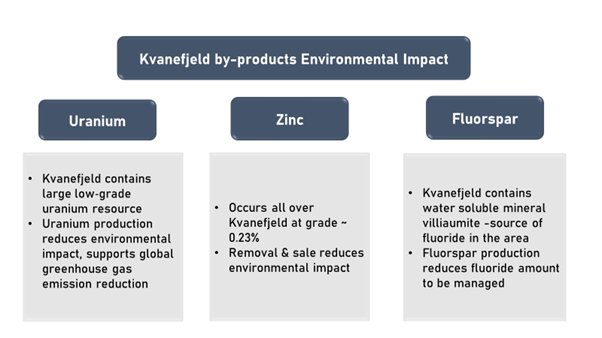 Greenland Minerals reports that Kvanefjeld deposit comprises of a huge low-grade uranium resource. A significant proportion of this is hosted within the main RE minerals.

Understanding the production process- it is vital to remove uranium through a uranium recovery circuit to produce a high-purity intermediate RE product. Uranium recovery will possibly be in the form of uranium peroxide (UO4), which is likely to meet specifications established by uranium conversion facilities.

Coming to the cost dynamics- annual cost of removing ~475 tpa of uranium is ~USD 5 million, according to GGG. Uranium sales is estimated to be USD 45 Mpa, a probable significant gross margin contributor.

Not only would uranium production reduce Kvanefjeld ‘s environmental impact, it can also contribute to reduction of global greenhouse gas emissions via power generation. Besides this, recovering uranium can reduce volume of uranium disposed off in tailings and residual radioactivity in the Project area.

Reportedly, zinc occurs all through Kvanefjeld deposit at a grade of ~ 0.23%. It is recovered in a flotation concentrate at first stage of RE production process. It should be noted that removal of zinc before RE flotation reduces chemical treatment stages in refinery circuit.

A boon to the environment, removal and sale of zinc reduces Kvanefjeld’s environmental impact by reducing zinc sulphide amount in tailings.

Kvanefjeld contains water soluble mineral villiaumite- source of fluoride in the Project area. In the upper levels, much of the villiaumite has been dissolved by groundwater, the reason of naturally elevation of levels of fluoride in groundwater. The remaining fluoride is dissolved from ore in the RE flotation circuit where it is instrumental in the RE flotation process, as a depressant of non-RE bearing (waste) minerals.

Understanding flotation process, water is recycled to generate optimum concentration of fluoride and facilitate RE flotation performance. Fluorspar is initially precipitated from a bleed stream from this water cycle process and is then thickened, filtered, washed.

The Company opines that presence of fluorine is cost saving, as otherwise an alternate depressant would be required in the flotation process.

Coming to production and cost dynamics, Kvanefjeld is likely to produce 12,500tpa of high-grade fluorspar (Metspar) which is used in manufacturing of steel, cement and ceramics. Consequently, fluorspar can add ~ USD 4Mpa of revenue.

Moreover, fluorspar production reduces fluoride amount to be managed within the Project area. The management of residual fluorine has been addressed in the EIA, which is currently under review under EAMRA.