The healthcare industry of Australia plays a major role in developing the country’s economy. The healthcare sector witnessed an increase in the demand for health services by Australia's growing and ageing population. The growth in the industry has been driven by increased patient volumes for general practitioners and specialists medical practitioners. Let’s take a quick look at MSB and KZA healthcare stocks.

Mesoblast Limited (ASX: MSB) is a biotech company, which operates in the area of adult stem cell technology. Mesoblast Limited was listed on ASX in the year 2014. On 24th June 2019, the company updated the market that the US Food and Drug Administration has granted the Orphan Drug Designation to its product rexlemestrocel-L, which is an encouraging piece of news for the company and its shareholders.

What is Orphan Drug Designation?

The US Food and Drug Administration provides orphan status to drugs and biologics, which are defined as those intended for the safe and effective treatment, diagnosis or prevention of rare diseases and disorders that affect fewer than 200,000 people in the United States.

The company’s investigational cell therapy known as Revascor comprises 150 million allogeneic mesenchymal precursor cells and is being developed for injection into the heart muscle of patients with moderate-advanced or end-stage chronic heart failure.

In another update, the company presented its Health Economics and Outcomes Research Data related to pediatric acute graft versus host disease at 24th European Hematology Association Congress. Accordingly, the company highlighted the additional direct healthcare cost of up to $500,000 on average per patient and a steroid refractory state in aGVHD, which may result in a significant deterioration in the quality of life. Acute GVHD, a potentially life-threatening complication of an allogeneic bone marrow transplant, with the most severe forms of the disease, III/IV or Grades C/D, recurrently being refractory to steroid therapy and associated with as high as 90% of mortality rates.

The company in its third-quarter results stated that it has innovative technology, which targets the most severe disease states refractory to conventional therapies. During the quarter, the company extended its license with JCR Pharmaceuticals Co., Limited in Japan for the use of TEMCELL® HS Injection in patients with Epidermolysis Bullosa. 241 pediatric patients undergoing HSCT were enrolled and treated at 50 sites in North America and Europe from 2007-2014. 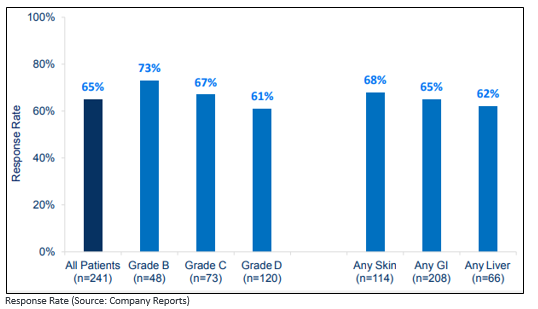 From the analysis standpoint, the gross margin of the company amounted to 68.2% in FY18. The current ratio for the period stood at 4.21x when compared to 1.73x of the prior period. This implies that the company is in a sound position to address its short-term obligations. The asset-to-equity ratio stood at 1.27x against the industry median of 1.53x.

The company will focus its efforts on product roll-outs in the United States and on the supply chain in order to meet the projected market demand for its follow-on products, among others.

A healthcare sector company, Kazia Therapeutics Limited (ASX: KZA) is a consolidated entity involved in pharmaceutical research and development. Kazia Therapeutics Limited was listed on ASX in the year 1994. Today, on 25th June 2019, the company released its presentation to Gold Coast Investment Showcase, stating that it has built a program of clinical trials around GDC-0084, covering the full range of brain cancers. Additionally, GDC-0084 works by switching off PI3K, which is a critical control mechanism that drives many types of cancer.

In another update dated 24th June 2019, the company published Investor Newsletter, wherein it has provided a brief update on Phase II clinical trial of GDC-0084, which is being investigated as a potential therapeutic for the most common and most aggressive form of brain cancer, glioblastoma. The company’s GDC-0084 for use in a rare form of childhood brain cancer, called DIPG, was featured throughout the mainstream newspapers and television. The company further stated that the GDC-0084 is being developed for the ~65% of newly diagnosed GBM patients who will not respond to the existing chemotherapy with temozolomide. It is the only drug of its kind, which can cross the blood-brain barrier. The ‘blood-brain barrier’ prevents most drugs from getting into the brain, rendering them useless as treatments for brain cancer. 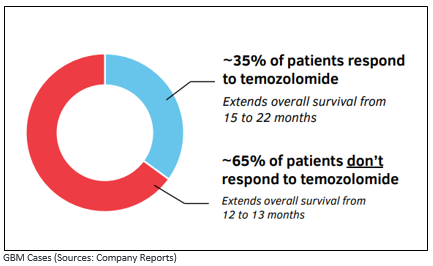 In another recent update, the company has reported that The Bank of New York Mellon Corporation and each group entity have become a substantial holder of the company with the voting power of 27.09% on 6th May 2019.

Looking at the key reasons to invest in the company. Kazia Therapeutics targets glioblastoma, which is an aggressive form of brain cancer, wherein the only existing therapy provides no benefit to two-thirds of patients, which implies a $1.5 billion potential commercial market. The company’s lead program, GDC-0084 was designed by Genentech, the world’s most successful cancer drug developer, and also concluded a successful Phase I human trial, showcasing its safety and efficacy. The company expects multiple data read-outs from international human trials at world-class cancer hospitals during the calendar year 2019.

Importantly, the company is now well-funded to see its R&D programs through key data read-outs in 2019. It has proceeds of $4.2 million from institutional placement and share purchase plan in October 2018. The current funding enables the company for the completion of Phase IIa GDC-0084 trial as well as completion of Phase I Cantrixil trial. Cantrixil is the second program of the company, currently, in Phase I study in ovarian cancer.

The current ratio of the company amounted to 3.63x in 1H FY19, reflecting Y-o-Y growth of 73.6%. This represents that the company is improving its capabilities in order to address its short-term obligations. The asset-to-equity ratio stood at 1.39x in 1H FY19 against the industry median of 1.53x.