Immutep Limited (ASX: IMM), based in Sydney, Australia, is a global biotechnology company, engaged in the research, development, and commercialisation of immunotherapeutic products to treat cancer and autoimmune diseases. Moreover, IMM is listed in the United States on NASDAQ under the ticker ‘IMMP’. Immutep’s lead product candidate is eftilagimod alpha (efti or IMP321), a soluble LAG-3Ig fusion protein based on the LAG-3 immune control mechanism, which is currently in a Phase IIb clinical trial as a chemoimmunotherapy for metastatic breast cancer, termed AIPAC.

Under the entitlement offer, Immutep would issue one new share for every 11.8 shares held by eligible Immutep shareholders as at 7.00 pm on 12 July 2019. The new shares will be issued at $ 0.021 each. The timetable for capital raising is given below.

The proceeds received from the placement and the entitlement offer have been indicated to be directed towards funding clinical development, manufacturing and regulatory affairs in addition to general working capital purposes.

So far, the company has enrolled around 226 patients in the AIPAC study at over 30 clinical trial sites across the UK and Europe including Germany, Belgium, Hungary, France, Poland and the Netherlands. The trial is essentially examining eftilagimod alpha (efti), in combination with paclitaxel, a standard of care chemotherapy. The combination is being evaluated as it is expected to make the immune system highly receptive response against tumour cells when compared with the combination of chemotherapy plus placebo.

AIPAC clinical trial is potentially being considered as a turning point that could form the basis to seek relevant regulatory approvals for efti with the European Medicines Agency (EMA) or the U.S. Food and Drug Administration (FDA), subject to reliable and meaningful data and regulatory interactions.

IMM expects the read-out of progression-free survival (PFS) primary endpoint, along with overall response rate (ORR) data, to occur in the first quarter of 2020.

New Australian patent received- Meanwhile, the company made an announcement on 21 June 2019, reporting that it secured a new patent, number 2014368420, from the Australian Patent Office. The new patent will expire on 19 December 2034. It is entitled “Combined Preparations for the Treatment of Cancer”.

The company had secured a grant of the corresponding European patent in May 2019, protecting its intellectual property concerning combined therapeutic preparations.

Medical technology company, Uscom Limited (ASX: UCM), headquartered in Sydney, Australia, is engaged in the design, development, manufacturing, and marketing of non-invasive cardiovascular and pulmonary medical devices, globally. With a market capitalisation of around AUD 19.27 million and around 137.64 million shares outstanding, the UCM stock is trading flat at AUD 0.140 on 10 July 2019 (AEST 02:02 PM).

Recently, Smart Top Overseas Limited increased its shareholding in the company to 19.12% (from 17.88%) and John Gleeson became a substantial shareholder in the company upon purchase of 7,013,679 ordinary shares, translating into a voting power of 5.1%.

On 9 July 2019, the company notified the market that it has closed the financial year FY19 with record monthly manufacturing and sales of USCOM 1A devices and record annual production and sales of BP+ and SpiroSonic devices.

According to the company’s half-year results for the six months to 31 December 2018, there was continued growth in income and total receipts from sales of current approved devices as depicted below. 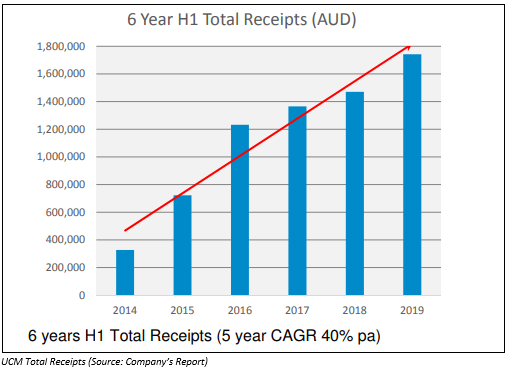 The significant upward shift in the demand for Uscom products has been recorded in advance of the company’s China NMPA applications, which are rapidly approaching approval phase. Sales of Uscom BP+ were predominantly research driven with two significant multi-centre blood pressure studies in the United States, partnering with one of the world’s leading technology companies, and in New Zealand, in a national public health project.

Meanwhile, the sales for SpiroSonic were influenced by growing US eHealth applications. While USCOM 1A numbers represent an end of year cluster to meet increasing demand from China.

Mach7 Technologies Limited (ASX: M7T) is a provider of enterprise imaging solutions. With operations in the United States, Australia and Asia-Pacific, the company supports healthcare enterprises with clinical and operational decisions. With a market capitalisation of around AUD 102.56 million and approximately 148.64 million outstanding shares, the M7T stock is trading at AUD 0.805 on 10 July 2019 (AEST 02:36 PM), edging up 16.667%.

New Contract with AAH- M7T has signed a contract with Advocate Aurora Health (AAH), according to an M7T announcement on 9 July 2019. The Software and Services Agreement has a minimum total contract value of AUD 5.7 million over a five-year period. Importantly, AUD 550k per annum would be added to the company’s annual recurring revenue, taking the total annual recurring revenue under contract to AUD 8.4 million per annum.

Under the contract concerning AAH’s Enterprise Imaging Platform, M7T will be responsible for the storage and management of images across its healthcare network. Along with the Mach7 Platform, AAH also purchased the migration engine to migrate ~3.5 petabytes of data. This deal is one of Mach7’s largest to date within the United States, and Advocate Aurora Health is now one of the company’s largest US customers, demonstrating that M7T has an increasing influence and market share in the US.

As a not-for-profit, integrated health system, AAH cares for nearly 3 million people. The US-based organisation, which has 70,000 team members, offers access to around 28 hospitals, 63 Walgreen’s clinics and 500 outpatient locations.

Leadership Changes - On 20 June 2019, Mach7 Technologies announced that Mr. Damien Lim would transition from the role of Chair of the Board to Non-Executive Director. Mr. David Chambers, presently a non-executive director, would take up the role of Chair. In addition, Mr. Mike Lampron, who was appointed as interim CEO on 11 March 2019, would be appointed to the Board as Managing Director. The changes were effective from Monday, 24 June 2019.

All the leadership changes are part of a planned board renewal process. Currently, the company’s Board is making composition assessments, aimed at ensuring the availability of best suited mix of skills, experience and diversity.

In May 2019, Mr. Travis Nuzzi was appointed as Mach7’s Vice President of Sales and Marketing to direct sales strategy, identify unmet market needs, and drive commercial growth in the United States.

March Quarter Update – According to the company’s results for the three months to 31 March 2019, Mach7 recorded sales orders of $ 3.1 million, up 19% on the prior quarter ended December 2018. Two new customers were signed during the period, including Sampson Regional Medical Center and Loyola University Health System.

In addition, further five sales orders were secured from the existing customer base, with the headline sales order being from Sentara Healthcare for its PACS modernisation project. Upon implementation of Sentara’s PACS product, Mach7 will generate an additional $ 420k every year in recurring revenue. Sentara is expected to be fully implemented in late 2019.

With the above sales, Mach7’s annual recurring revenue under contract (CARR) reached around $ 7.6 million, an additional $ 865k since the end of last quarter (+13% growth for the quarter). Another new customer has been signed since the end of the quarter, named Children’s of Alabama (sales value: ~ $ 700k), which is expected to add $ 70k each year to recurring revenue.

In total, the quarter generated cash receipts of $ 3.6 million. 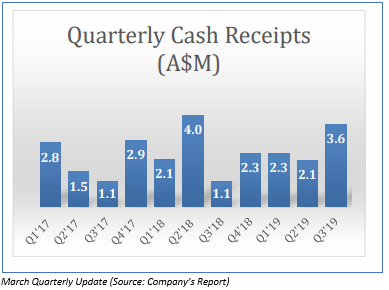