Good things happen when people can move across town or simply toward their dreams. - Uber

In the first week of January 2020, American multinational ride-hailing giant Uber and South Korea-based automobile manufacturer Hyundai Motor Company joined forces and announced a partnership for the production of world's first electric air taxis. Uber is building the future of aerial ridesharing to give riders the option of an affordable shared flight by 2023, yes you read it right.

Hyundai is the first member of the Uber Elevate initiative and will be producing the Electric air vehicles under the agreement while Uber will manage airspace support services, ground transportation connections as well as customer interfaces through the aerial rideshare network that it is working on. Not only that, the two parties have also indicated to be working on infrastructure designs and feasibility to facilitate take-off and landing of the new age vehicles. 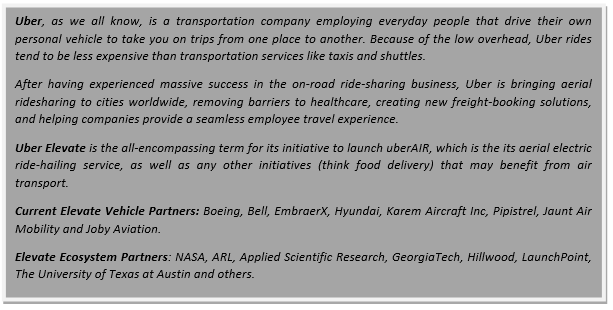 The objective is to ensure that the aerial ridesharing network is safe, quiet, and environmentally conscious, while also working towards integrating it with other ground transportation options.

The ride-sharing company also informed the market that recently, Melbourne joined Dallas and Los Angeles as the first three cities that would be offering Uber Air flights, that would essentially become demonstrator flights in 2020 followed by their commercialisation in 2023.

At the recent Consumer Electronics Show 2020 held in Las Vegas Convention Centre, Las Vegas, Nevada, United States, Hyundai unveiled a new full-scale concept PAV (personal air-vehicle), developed in collaboration with Uber. This concept PAV S-A1 is an eVTOL or electric vertical take-off and landing aircraft, that would transition to wing-borne lift in cruise mode while transitioning back to vertical flight to land. eVTOL will have the capacity for seat 5 people, including the pilot, with a cruising speed of 290 kmph and cruising altitude of ~1,000-2,000 feet above the ground as well a flying trip up to 100 km as currently stated.

Hyundai also informed during the unveiling that initially, the air vehicle will be piloted and over time ,it is planned to become autonomous, and require 5-7 minutes for recharging even in peak hours.

Uber plans to give its riders the option of shared VTOL for one leg of their travel, seamlessly riding between conveniently located Skyports, from ground -to air-to ground. To enable to same, the company continues to work on establishing a network of Skyports to make seamless operations possible that would include a high number of takeoffs and landings.

Some of the key architecture, design, and engineering companies are assisting Uber and working to devise solutions capable of handling up to 1,000 landings per hour, even within footprints as dense as 1- 2 acre.

UberAir will be powered by Elevate Cloud Services (ECS), a suite of software including the company's own UTM service, for managing dense operations of unmanned, low-altitude air traffic. The company had plans to first deploy ECS in 2019 with autonomous drones under the FAA’s UAS Integration Pilot Program to begin testing urban drone deliveries for Uber Eats.

When Travis Kalanick and Garrett Camp were unable to find a Taxi and found themselves stuck on a snowy evening in Paris (2008), they thought to themselves, “What if you could request a ride simply by tapping your phone?” Garrett Camp envisioned cities full of private cars for hire with an app and Travis Kalanick took it from there, and the story continues. Uber started as simple idea, and what began as a thought went on to grow into a global brand focussed on helping people to move opportunity out in the world.