Platinum Asset Management Limited (ASX :PTM), is associated in Fund managing and has both retail and corporate clients. The headquarters of the company is located at Sydney, Australia. The company derives revenue by charging a professional fee from the investors.

Operating performance: In the last five years, Platinum International Fund generated a compound return (CAGR) of 9.5% p.a. and a cumulative return of 57.3%, respectively. Meanwhile, the broader market performance was better at a CAGR of 12.6% and a cumulative return of 81.4% during last five years. During last one year, the Index has generated a return of 11.3% whereas Platinum has given a nominal return of 0.7%. Platinum has a mandate to invest 65% of FUM across global equity. While the global market hasnât performed well during recent past, the performance of the Fund has also came under the scanner as it has not performed according to expectations. 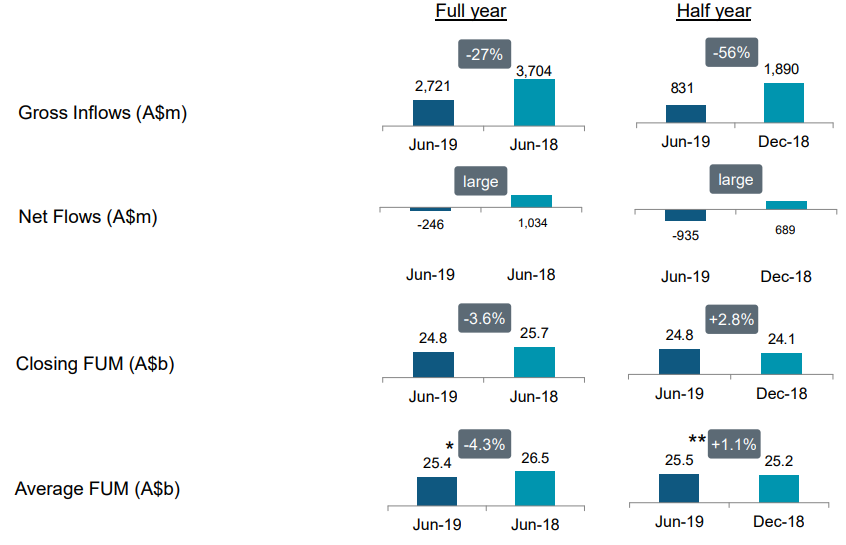 Gross inflows in FY19 was at $2,721m, down by 27% y-o-y followed by full year net outflows at$246m. Retail inflows slowed during second half due to negative investor sentiment. Sentiment was affected due to market volatility and last yearâs tepid returns. The variance between first half inflows and second half outflows was caused due to increase in redemptions and reduced inflows.

The fund house got a Retail fund inflow of $201m over the year while institutional fund flows were stable with marginal net outflows of $59m during the year. The fund house recorded zero account closure in FY19.

Dividend announcement: For the second half, the Board has announced a final fully franked ordinary dividend of 14 cents per ordinary share held. The ex-dividend date for the 2H FY2019 is 27 August 2019 followed by the record date of ordinary dividend is on 28 August 2019. The payment date was announced on 20 September 2019. Dividend yield ratio of the company stands at 6.73%.

Perpetual Limited (ASX: PPT) is an Australia based fund management company engaged in portfolio management, financial planning, trustee, responsible entity and compliance services, executor services, investment administration and custodial services. The headquarter of the company is located at Sydney, Australia. The company has $27.1 b of funds under management.

FY19 results for the year ended 30th June 2019: PPT posted FY19 revenue at $514.1m, an 4% y-o-y decrease while net profit came at $115.9m against $139m in FY18. Staff costs were down by 7.8% y-o-y followed by expense on technology came 7.8% more than FY18. Cash stood at $299.6m, while goodwill was valued at $345.8m at the end of 30th June 2019. The balance sheet had corporate debt amounting to $87m and a liquid investment of $69.7m. Net Asset of the company was valued at $662.2m. PCT delivered revenue growth in both Management Fund Services and Debt market services. Higher PCT revenue reflected growth in both MFS and DMS as well as data services growth following RFi acquisition. Lower Perpetual Investment revenue impacted due to lower net flows and lower fees. 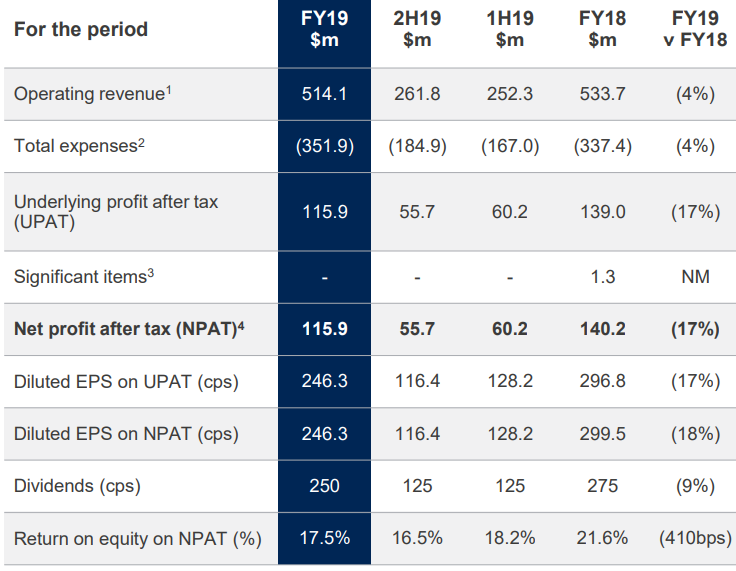 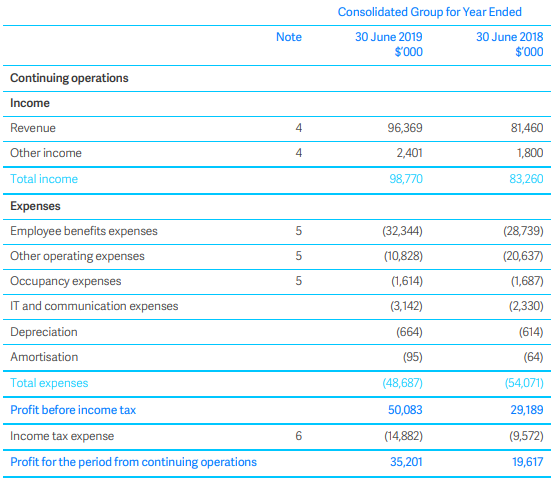 Pendal Group Limited :(ASX: PDL ) is associated with investment management services and operates in the Australian market. The group had $100.9 b of Funds under management as on March 31, 2019, and derives income by charging management fees from its clients. PDL was listed in ASX during 2007. The company is headquartered in Sydney, Australia. The group invests on global equities and different asset classes for diversification. 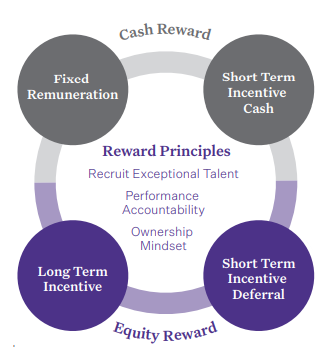 Issue of ordinary shares: Recently the company announced its issue of 4,795,815 ordinary shares (Shares) under the scheme of the Fund Linked Equity program. The Shares are issued following an exercise of rights by fund managers who will participate in the above program. The Shares will have vesting restrictions for next five years and will enjoy dividend and voting rights during this period.

Appointment of Alexandra Altinger as CEO for UK, Europe and Asia: With a market update on 23rd July 2019, the company has announced the appointment of Alexandra Altinger as CEO for the operations across UK, Asia and Europe. Mr. Alexandra served the role of CEO of Sandaire Investment Office and worked for four years. He has cross-border experience and expertise in wealth and asset management as well. He has experience across multiple markets, proprietary trading, research, portfolio management. The management has cited that the company will be looking for value addition and guidance from Mr. Alexandraâs wide experience.

Financial performance for the first half of 2019