Australiaâs wealth management firm, Netwealth Group Limited (ASX: NWL) has reported strong FY19 results today. As at 30th June 2019, the company had Funds Under Administration (FUA) of $23.3 billion, up 29.9% on the previous corresponding period (pcp). During the year, the company experienced FUA net inflows of $4.3 billion. The growth in FUA was driven by existing financial intermediaries as well as new financial intermediaries. 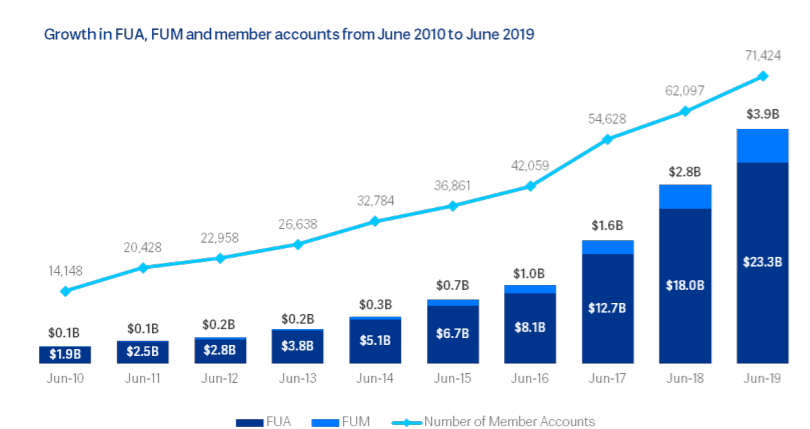 Following the release of FY19 results, NWL share price increased by 3.597% during the intraday trade as on 19 August 2019.

In FY19, Netwealthâs platform revenue over average FUA decreased to 48.1bps, from 53.4bps in FY18. The average revenue earned per account increased by $55 to $1,460 per account during FY19, driven by the increase in the average account size to $323,000 per account at year end. Larger accounts typically earn higher transaction and ancillary fee income as these clients desire higher functionality.

During the year, employee benefits expense increased by $3.6 million (12.5%) to $32.3 million while headcount increased by 34. The total other operating expenses increased by $2.2 million to $14.5 million in FY2019. The increases were mainly related to software licences, insurance, compliance, advertising, marketing, and other expenses.

During FY19, the company increased the investment in its platform technology and functionality with a significant number of enhancements implemented throughout the year. The company is committed to retaining its market leadership by providing quality administration and service excellence. The company is also focussed on winning and retaining profitable business and developing new revenue streams to diversify revenue sources. During the year, the company released a range of new platform features and products focused on improving the delivery of advice and increasing client engagement.

It is expected that the number of advisers changing platforms will continue to increase in future. Netwealth Group believes that it is well-positioned to take advantage of this opportunity. The company in its 2019 Annual report has assured that it will continue to enhance product investment options and functionality, provide clients with efficiency in portfolio management and prioritise functional enhancements.

In FY20, the company expects its FUA net inflows to be in excess of $7 billion and FUA in excess of $30 billion. The growth in FUA is supported by the companyâs existing advisers. Besides that, the companyâs strong pipeline of new business won, and opportunities will also underpin FUA growth. It is expected that FY2020 will be highly influenced by regulatory reform and more critical consumers in the superannuation and banking sectors. The company is planning to abreast of regulatory obligations and community expectations to ensure compliance and minimise risk of breach and or reputational damage.

Now letâs look at the performances of some of the other financial services companies trading on ASX.

Independent, global investment management business, Pendal Group Limited (ASX: PDL) had Funds under Management (FUM) of around 48.5 million as at 30 June 2019. For the first half of FY19, the group reported total revenue and other income of around $242.44 million, down by 19.8% on pcp.

For the half year period, the company declared a partly franked interim dividend of 20.0 cents per share which was 10% franked.

IOOF Holdings Ltd (ASX: IFL), a leading group in the financial services industry, had Funds under Management, Advice and Administration (FUMA) of $149.5 billion as at 30 June 2019, up 18.7%, or $23.6 billion on the previous corresponding period (pcp).

For the first half of FY19, the company reported Statutory NPAT of $135.4 million, up 200% on pcp. The Underlying EPS for the first half period declined by 4% to 28.5 cents per share, as compared to pcp.

Diversified financial services company, Perpetual Limited (ASX: PPT) had FUM of around $27.1 billion at the end of June quarter, down $0.3 billion on the last quarter.

In the first half of FY19, the company witnessed a decline of 12% in its NPAT as compared to pcp.

This acquisition has also expanded the companyâs investment guidance to the range of $300 million- 320 million. For the year 2020, the company is now expecting its Net Profit after Tax (NPAT) to grow by 15% to 18% over prior year.

In FY19, the company reported a 9% growth in its NPAT, which reached to $70.3 million and 16% growth in the consumer loan book which grew to $212 million. The companyâs consumer lending and US debt buying businesses performed well during the year. The company reported basic earnings per share of 141.9 cents for FY19, up 5% on pcp. For the full year 2019, the company declared a total dividend of 72 cents per share, 8% on the previous year.