Leading pure-play metallurgical coal project developer, Aspire Mining Limited (ASX: AKM) has released its Quarterly Activities Report for the three months to 30 September 2019. The main focus of the activities undertaken during the quarter continued to be the advancement of the Definitive Feasibility Study (DFS) for the Ovoot Early Development Plan (OEDP) through engagement in community relations programs and seeking ground access and other approvals from the local community and government.

The company closed the quarter on a strong note with a cash balance of AUD 9.83 million. The operating activities including payments for exploration & evaluation, staff costs, and administration and corporate costs generated cash outflows of AUD 1.49 million while the investing activities like payments for acquiring property, plant and equipment resulted in cash burns of AUD 15K.

Mine Planning for DFS: Aspire Mining had revaluated the first 5 years of the Pre-Feasibility (PFS) Mine Plan during the prior quarter ended 30 June 2019, which led to the identification of a staged waste removal strategy resulting in –

Subsequently in the September Quarter 2019, Aspire engaged with multiple mining contractors and received quotes that are presently being modelled into this staged mine plan with results to be released shortly. In addition, to take the OEDP Extended Case up to the DFS status, geotechnical and hydrological drilling results need to be incorporated. The company is progressing discussions with local community leaders for the necessary mining and road approvals as the local communities have tied further on-site work to another Community Benefits Agreement, that is also being finalised.

Leadership Changes: On 25 October 2019, the company welcomed the new COO, Mr Sam Bowles, a veteran coal mining executive, who has been charged with the delivery of the OEDP. Mr Bowles’s prior engagement was with TerraCom (ASX: TER), where he had been leading the Mongolian Business Unit, and prior to that as CEO at Mongolian Mining Corporation (HKEX: 0.975). As a graduate engineer, he joined Dartbrook Colliery in NSW in 2002 before moving to Rio Tinto’s Hail Creek operations and is currently a member of the Australasian Institute of Mining and Metallurgy.

Marketing: Aspire Mining has been advancing marketing initiatives which include multiple steel mill visits that were deemed as potential cornerstone customers in north-eastern China. The follow up meetings for the same are being scheduled for December Quarter 2019.

The Ovoot Coking Coal will be shipped from the Erenhot, a border port that is easily accessible via Chinese rail solutions. So far, Aspire Mining has signed a non-binding offtake agreement with a Russian trading company supplying coal into the Russian steel market, whereby it will provide up to 600 ktpa of coking coal over five years.

The company will finalise further offtake contracts after the execution and evaluation of pilot shipments. 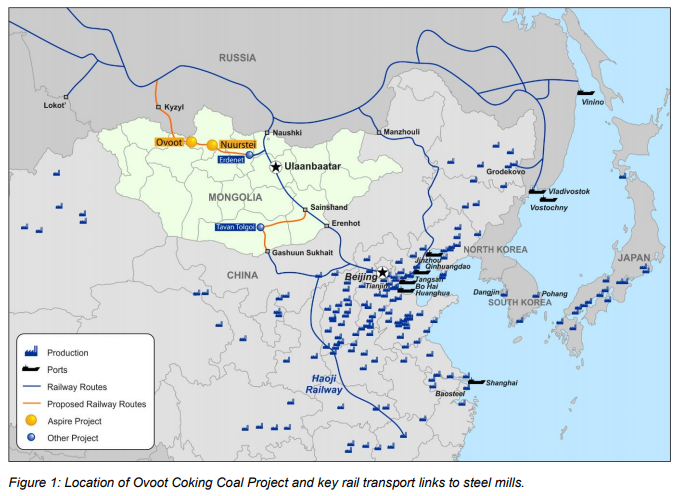 Logistics: To support further expansion of OEDP to more than 4Mtpa saleable output rate, a Mongolian based rail infrastructure company-Northern Railways LLC, has been delegated to develop the Erdenet to Ovoot Railway.

The infrastructure project is supported by a consortium comprising:

The Erdenet to Ovoot Railway would be a multi-user rail line spanning 547 km linking Ovoot to the town of Erdenet, while also connecting northern Mongolia to foreign markets of China and others.

Aspire Mining has also identified that the Russian steel industry is now a viable alternative market to the Chinese market for coking coal, as the former has similar margins, supported by the domestic coking coal pricing in Russia along with the competitive transport cost.

The company has also received preliminary cost estimations from rail logistics consultants demonstrating that exporting into North East China is feasible by exporting north to Naushki then east to the Manzhouli Port on the Russian\China border. During the current quarter, Aspire’s management plans to visit Manzhouli to confirm capacities and costs on both sides of the border.

Community Relations: The local community liaison officers posted by the company were increased from 12 to 30 during the quarter and a site visit to an existing large-scale coal mining operation within the country was organised to enhance local understanding of the project.

Besides, recent modelling of the OEDP PFS confirmed that for more than 10 years of its planned mine life, it will generate 2.3 trillion MNT (~ USD 860 million) in royalties and taxes to various levels of the Mongolian Government, including ~87 billion (~ USD 32 million) to the Tserserleg Soum.

Corporate: On 6 September 2019, the company executed a Share Subscription Agreement with its major shareholder Mr Tserenpuntsag Tserendamba whereby he agreed to receive placement of 1,595.9 million Aspire Mining shares to be issued at AUD 0.021 each, raising around AUD 33.5 million before costs. More on the same may be READ here.