Three Cues From The Latest Figures On Unemployment Rate

Despite having a diversified and skilled services-based workforce, the country has been facing turmoil in its labour market. The persistence of higher unemployment rate in Australia has remained a cause of concern for the Reserve Bank of Australia (RBA) in the last few months. The central bank has lowered the interest rates to 1 per cent this year to create stabilisation in the Australian economy. As per Austrade, Australia has a culturally diverse labour force, wherein more than 30 per cent of the strong employed persons are born overseas. The nation?s competitive edge in international business has been boosted by many foreign-born employees from Asia or Europe that have enriched the country?s reputation for culturally diverse workplaces.

The independent statistical agency of the Australian Government, the Australian Bureau of Statistics (ABS) has recently released employment figures for August 2019. One can deduce the following three cues from the unemployment rate figures: 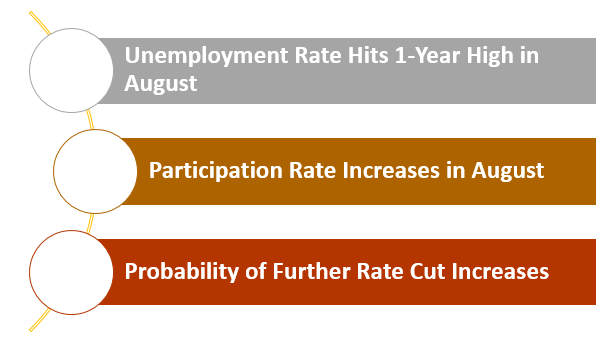 Let us discuss each one of these cues in some detail below:

The nation's jobless rate touched its highest level of the year, prompting the country?s currency to fall to a two-weeks low value of $0.6787 on 19th September 2019. 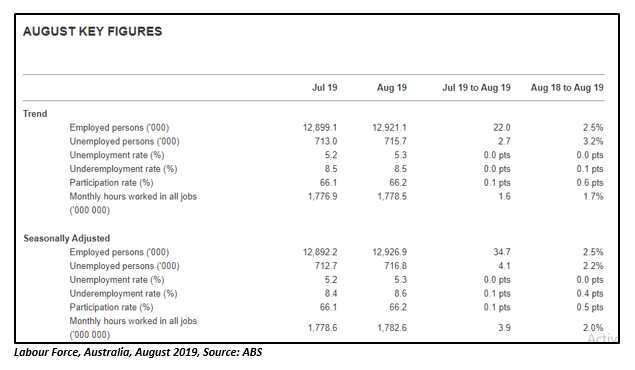 From July 2019 to August 2019, Victoria witnessed the largest increases in employment of 20,300 persons, followed by New South Wales where employment rose by 16,700 persons. Queensland experienced the largest month-on-month decline of 7,200 persons in August.

Let us take a look at the state-wise unemployment data (seasonally adjusted terms) for July and August 2019 in the below table:

ABS data also revealed that the participation rate rose by 0.1 points to 66.2 per cent in August 2019 in trend terms as well as seasonally adjusted terms.

In seasonally adjusted terms, Victoria and South Australia saw a maximum increase of 0.3 points to 66.4 per cent and 63.9 per cent, respectively in August. Queensland was the only state to witness a decline by 0.3 points to 65.8 per cent.

The below table shows the participation rate observed by different states of Australia in August in trend terms and seasonally adjusted terms:

As per the market analysts, the rise in August?s unemployment rate was due to the strong population growth and high participation rate.

The ABS latest estimates highlighted an increase in the population of Australia by 1.6 per cent to 25.3 million people during the year ended 31 March 2019. A few analysts are of the view that there is an abundance of underutilised workers in Australia that has kept the country?s wage pressures muted.

Although the Australian economy experienced employment growth in August, the increase in the unemployment rate has raised the probability of another rate cut by the RBA in the near-term.

Recently, the US Federal Reserve has also reduced the interest rates further for the second time this year to sustain economic expansion. Fed has lowered the benchmark overnight lending rate by 25 basis points to a range of 1.75 per cent to 2.00 per cent.

As per Fed Chair Jerome Powell, the economic outlook of the US is favourable, and the current rate cut is designed to insure the economy against ongoing risks including resurgent trade tensions and weak global growth.

Economists are now expecting another rate cut in Australia by October amid weak employment figures of August and the Fed?s rate cut move.

This website is a service of Kalkine Media Pty. Ltd. A.C.N. 629 651 672. The website has been prepared for informational purposes only and is not intended to be used as a complete source of information on any particular company. Kalkine Media does not in any way endorse or recommend individuals, products or services that may be discussed on this site. Our publications are NOT a solicitation or recommendation to buy, sell or hold. We are neither licensed nor qualified to provide investment advice.?