Online grocery delivery company Instacart might go public either through an initial public offering (IPO) or direct listing as early as next year, reports said.

The California-based retailer might go public in early 2022, according to some observers.

The company has not yet filed the IPO papers with the Securities and Exchange Commission (SEC). But some analysts said that it might also take the direct listing route.

Instacart serves customers in more than 5,500 cities in the US and Canada.

Its IPO has been one of the most-anticipated public offers this year. Many investors have been waiting for its stock debut.

In recent comments, Instacart CEO Fidji Simo had revealed plans to expand the business. Some analysts believe the IPO was getting delayed due to its preoccupation to expand its services.

The retailer has been stepping up efforts to expand its grocery delivery service to new areas. For instance, it has invested heavily in advertising and tech tools to market its products.

Investors believe their interest in using tech tools to drive sales might be due to their previous association with the social media company.

Everson served as the global advertisement chief of the Meta Platforms, while Simo was the former head of the Facebook app. 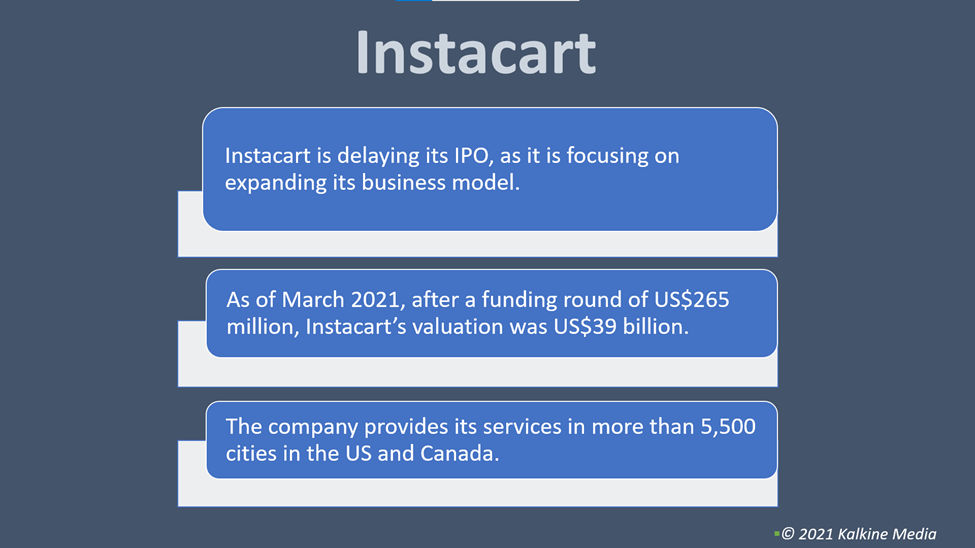 Also Read: Qualigen (QLGN) stock jumped 32% Tuesday – Is it worth the price?

The current valuation of Instacart

Instacart was valued at US$39 billion after a funding round of US$265 million in March 2021.

Also Read: Bionomics files for IPO with SEC - How to buy the stock?

In the first three months after Fidji Simo joined the firm as CEO, Instacart bought two companies: catering software firm FoodStorm, and self-checkout "smart" cart startup Caper AI for around US$350 million, Instacart’s largest acquisition ever, Bloomberg reported. The company runs 40,000 stores in more than 5,500 cities in the US and Canada.