Rising natural gas prices are driving up demand for clean hydrogen. The production of hydrogen by the splitting of the water molecule using electricity generated from renewable sources is about 10% cheaper in Britain than using power generated from natural gas, according to an analysis conducted by the Independent Commodity Intelligence Services (ICIS).

Hydrogen is regarded as a green source of energy as its production does not release carbon emissions, unlike natural gas. Due to the rise in commodity prices in 2021, green hydrogen is currently a cheaper alternative to fossil fuels and can be used in building heating systems and heavy machinery.

In the UK, a large majority of the hydrogen was generated from natural gas. However, rising natural gas costs are expected to change the equation. Green hydrogen prices are expected to fall further with declining technology prices and as more wind power plants become operational. Here is a detailed review of the investment prospect in three ‘green’ hydrogen stocks – AFC Energy, ITM Power and HydrogenOne. 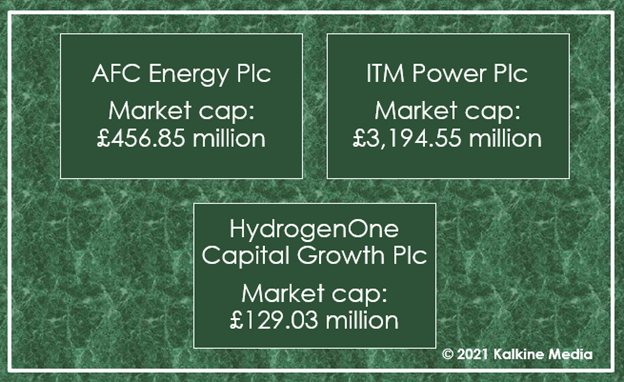 In August, AFC Energy inked a partnership with ABB, a provider of electrification and digitalisation technologies, to deliver its first hydrogen fuel cell system.

Since its launch in July this year, HydrogenOne has invested in 19 global hydrogen sector listed equities, with an average market cap of £2.2 billion and an initial investment of £9.6 million. These companies are strategic players operating in the fuel cell, electrolysis, and clean hydrogen sectors.