Banking stocks are often seen as attractive investment options for investors, as they not only offer price appreciation but regular dividends as well to their shareholders.

Partly due to the COVID-19 pandemic and due to rising tech-savviness among people, many consumers today are opting for digital banking solutions. This is leading to the closure of a number of bank branches. In accordance with the demand, banks are streamlining resources and upgrading their digital banking options to best suit the needs of consumers today. Here is a review of the investment prospect in three banking stocks – Barclays, Banco Santander and Lloyds Banking Group. 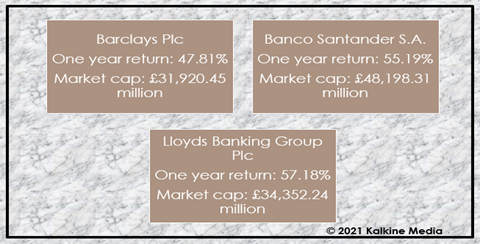 Barclays is an FTSE 100 listed banking firm that offers services to corporate, government and institutional clients. The company recently announced the appointment of the new CEO - CS Venkatakrishnan, who replaced Jes Staley. Recently, the company also announced the closure of its two Northamptonshire branches by early 2022, as customers move to use digital banking alternatives.

Barclays’ board announced a half-year dividend of 2.0 pence per share to shareholders.

For the first nine months of 2021, Banco Santander earned a total income of €34.6 billion and an attributable profit of €5,849 million. During the period, the company’s total number of customers rose to 152 million, and about 54% of group sales were through digital channels compared to 44% in the same period in 2020.

Banco Santander’s board announced an interim cash dividend of €4.85 cents per share.