ValiRx Plc (VAL) is a life science company primarily focusing on oncology. Producing novel therapeutics for cancer and related biomarkers is the company’s forte. The company is looking forward to licenses and exploring collaborative opportunities with potential players in the field of oncology. The company has a steady business model, which aims at creating value by early-stage detection thereby mitigating risk considerably.

The company’s four drugs (therapeutics) are in development, these are researched and developed in Word class institutes, such as Imperial College and Cancer Research UK. These drugs can produce best results by conventional methods. These drugs are patented and have received commercial rights across the globe.

The recent cancer treatments methods heavily relied on Chemotherapy and other non-specific agents. These drugs are specific agents which target specific cancer cells with precision, which will limit toxins and result in treating cancer more effectively. This advancement in treatment can surely turnaround fortunes for patients suffering from cancer.

The company has segmented its operations into two divisions ValiPharma and ValiSeek. The biopharmaceutical wing is dedicated to medical advancement which can be customized for the treatment of cancer. This wing is known as ValiPharma.

VAL101 is currently focused on the identification of targets and optimisation phase to neutralise Pancreatic cancer. VAL201 is a peptide and the pieces of evidence suggest that it has helped in reduction of PSA levels and disease stabilisation. It has gathered support from the Cancer Research UK and has done well in its Clinical Trial in patients suffering from advanced Prostate cancer.

VAL301 is basically reformulated VAL201, developed for pre-clinical (later stage) of Endometriosis. Endometriosis is one of the major causes of infertility in females. According to the Pre-clinical data, there is a significant development in the medical treatment of endometriosis and other gynaecological conditions, this drug will provide protection from the oestrogenic effects on uterine tissue and at the same time keeping bones and reproductive system healthy.

The company entered into a joint venture with Tangent Reprofiling Limited to form ValiSeek. It is developing a drug VAL401 for pre-clinical (later stage) treatment of non-small cell lung cancer through a pilot phase II clinical trial. The drug is a reformulation of Risperidone, which has a proven track record of treating psychosis.

To prevent and cure metastatic cancer, the use of VAL201 is allowed by the US Patent and Trademark Office (USPTO). In metastasis, cancer spreads from the place of origin to other places in the body. This move from USPTO will benefit in preventing metastatic cancer to spread in further parts of the human body (including prostate cancer) using this drug.

In metastatic disease, the infection spreads further from the prostate to other parts of the body, most probably it targets the bones and lymph nodes. This progression is called Advanced Prostate cancer. This disease can be treated by controlling symptoms, slowing the pace of cancer progression as well as curing the tumour.

The VAL201 compound specifically curtails the growth of the tumour by inhibiting the cells of the infected region. The effects on the lymph node metastases have been successfully demonstrated in the pre-clinical cancer model.

The compound is currently being assessed for side-effects and tolerance in Phase I/II study and its effect on curing metastatic cancer and tumours. There are encouraging results for tolerance noted through imaging technology and biomarkers. The objective is to minimize the symptoms and disease progression using the drug and can provide a ray of new hope for patients.

The VAL201 is safe and well tolerated at doses up to 4mg/kg in Phase l/ll Clinical Trial and has seen success in metastatic cancer. At present, the company is trying to gauge the maximum dosage of VAL201 that can be taken without any undue risks and tolerated based on earlier collated data. This study will either lead to out-licensing the VAL201 to an industry major or will lead to further research.

ValiSeek has shown intent on further advancement of VAL401 with the European and the US partner upon letters of intent with regards to the upcoming proposed trial which will be co-financed and ValiSeek might seek external financing if required.

VAL301 is for the treatment of endometriosis, without affecting the density of bones or fertility is in late pre-clinical phase. It received a US patent grant and patent allowances from Russia and China.

The results for VAL101 compound were astounding. The compound is optimized VAL101 (IInd generation) molecule which is commercially viable. The compound programs death in cancer affected cells (apoptosis). This phenomenon is called the apoptotic effect on cancer cells.

Post completion of the current patient group, the results will be prepared for an independent evaluation from the first clinical trial of VAL201.

The company confirmed that it has received regulatory approval from the Medicines and Healthcare products Regulatory Agency ("MHRA”) and the Research ethics committee (“REC”) based on its clinical results. It got a major update to the trial of VAL201 including the appointment of a Principal Investigator to the clinical team. Dr Mark Linch has been appointed at University College London Hospital as the Principal Investigator.

The company was earlier in subscription agreement with the European High Growth Opportunities SF, but recently it announced the conditional termination of the agreement. As per the announcement made on June 13, 2019, the directors were expecting settlement payment in cash not exceeding £150,000.  The company agreed finally on settlement in shares amounting to £212,500 issued at the lowest daily price during the last five trading days. By exiting the subscription agreement, the company was able to maintain its liquidity as per the company’s directors. Notably, the company was expecting inflows of around £150,000 from the sale of securities (unlisted) plus a tax credit (Research & Development) of £400,000 from HMRC. 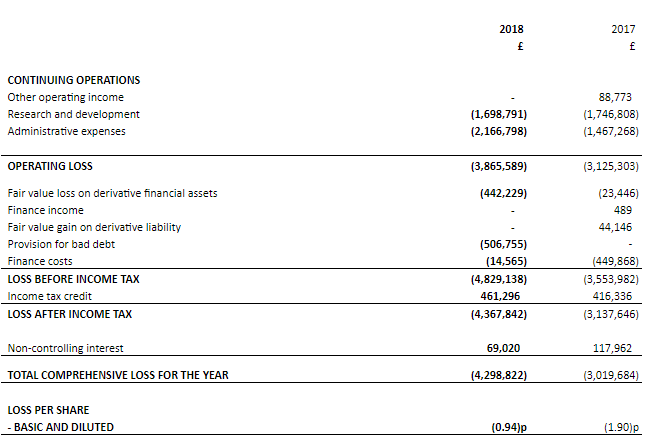 The company is pleased with the progress across its drug portfolio during the period under review and new technologies and tools that are revolutionising their understanding of cancer, many of which come from ValiRx itself. The company looks forward to patients and shareholders to reap benefits from consistent efforts in advancing new cancer treatments.

Daily Chart as at June-28-19, before the market close (Source: Thomson Reuters)

The shares of the company (at the time of writing) were trading below the 30-days and 60-days SMA, which shows a negative trend in the stock price movement and could further move down from the current trading levels.

In the past 1 year, shares of ValiRx Plc have delivered a negative price return of 94.17 per cent. Also, on a year-to-date basis, the stock was down by approximately 78.79 per cent and plunged by 69.57 per cent in the past three months.