US Market News: The key indices of Wall Street opened in red in Monday’s trading session. The pending home sales in the US declined by 1.1% month on month in October 2020. Among the gainers, Novavax skyrocketed by nearly 22.5% after the company pushed for its last stage trial for its experimental covid-19 vaccine. Moderna surged around 16.3% after it stated that it will apply for emergency authorization for its covid-19 vaccine in the US and Europe. Tesla rose around 2.0% after it got a go ahead signal to sell its utility vehicle in China. Pfizer moved up by around 1.9% after the reports that the UK will approve its covid-19 vaccine soon. Among the decliners, Nikola was down by around 7.6% amid the worries that its founder will sell his full or part stake in the company.

European News: The London market traded in the red as the trade talks continue to be in a deadlock. The UK reported 97,530 mortgage approvals in October 2020, and the mortgage lending was reported at £4.29 billion in the same month. Among the gaining stocks, shares of ULS Technology surged by about 31.2% after it announced the disposal of Conveyancing Alliance for £27 million. Ferrexpo was up by around 2.2% after Kyiv Court cancelled Ferrexpo AG share restriction. Among the decliners, Petropavlovsk was down by about 2.3% after it announced Denis Alexandrov as the CEO.  G4S declined by close to 1.8% after it announced the extension of a cash offer from GardaWorld. Pets at Home slipped by nearly 0.2% after the company announced the acquisition of The Vet Connection. 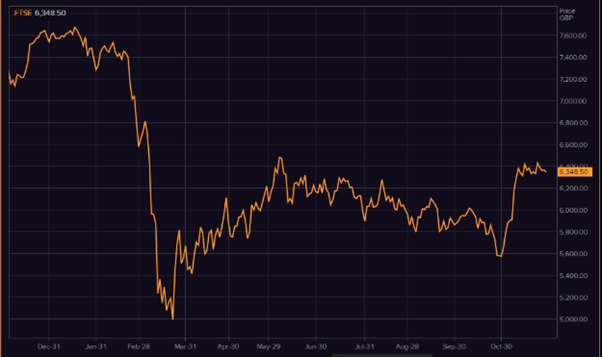