The company also provides customized or personalised cakes for purchase on order or demand advance via online through https://www.eggfreecake.co.uk/ or from the store. The company functions through 110 franchise stores in the United Kingdom.

In 2008, the company opened its initial store in the heart of East London.Â The primary company mission was to offer the new idea in the United Kingdom market; delightful fresh cream Celebration Cakes made excluding eggs and an âon demandâ service.

Cake Box is a bakery with a difference. It only sells cakes made without eggs. Co-founder Pardip Dass began the business with Sukh Chamdal after failing to find an egg-free cake for his daughterâs birthday â many people of South Asian heritage follow a strict lacto-vegetarian diet.

Cake Box functions as a franchise. The sponges are baked in Enfield, London, and then decorated with fresh cream in shops. They are not suitable for vegans, but the chain is expanding fast, especially in areas with historic immigrant populations.

On 2nd May 2019, the company announced that it was notified on April 30, 2019, that Dr Jaswir Singh, has purchased, in aggregate 9,346 ordinary shares of 1 pence each in the Company ("Ordinary Shares") for his SIPP. 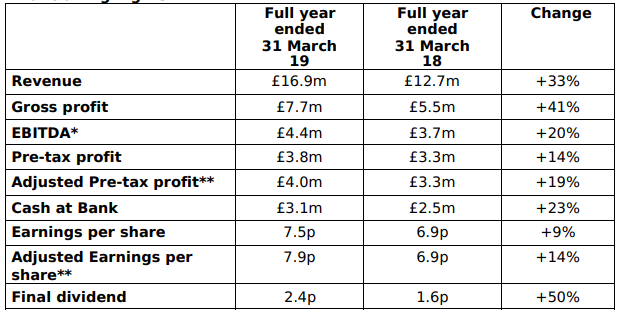 As soon as temperatures returned to seasonal norms, the franchise stores saw an increase in sales progress, and this strengthened through the Q4 with franchise store like-for-like sales recovered to 8.6 per cent in the H2 as compared to 4.4 per cent in the H1. Franchisee total turnover rose to Â£30.7 million as compared with the financial year 2018 of Â£25.9 million.

The effective rate of taxation stood at 21 per cent, an increase of 4 per cent as compared with the financial year 2018 of 17 per cent. This was higher than the standard rate of 19 per cent, driven by the AIM listing prices.

The purchase of the two distribution centres and freehold warehouse, a combined investment of Â£1.4 million, was partly funded by mode of a new 15-year mortgage which was Â£650 thousand, with the rest being paid over existing cash resources.

The Groupâs cash at the bank increased by Â£0.6 million or 23 per cent to Â£3.1 million as compared with the financial year 2018 of Â£2.5 million. The payment for the freehold warehouses was Â£0.75 million and payment of a H1 dividend per share of 1.2 pence which accounted for Â£0.4 million. At year-end, the company has a net cash position of Â£0.9 million which was unchanged from the corresponding period of the last financial year of 2018

On 31st March 2019, the Groupâs trade and other receivables were Â£1,585,348, a marginal surge from the previous year data. Most of this sense of balance relates to trade receivables which have declined by 5.9 per cent despite the surge in revenue.

In the financial year 2019, the group trade and other payables stood at Â£1,414,693, a surge of 2.6 per cent as compared with the previous year data. The company enthusiastically sourced price effective dealers without compromising on the value of the products.

On 24th June 2019, at the time of writing (before the market close, GMT 4:00 PM), CBOX shares were trading at GBX 169.13 and surged by 1.58 per cent against the previous day close. During the last one-year, shares have registered a 52w high of GBX 192.00 and a 52w low of GBX 118.00 and at current market price, the stock was trading 11.91 per cent lower against the 52w high level and 43.33 per cent above the 52w low level. Cake Box Holdings PLCâs outstanding market capitalisation of around GBP 67.4 million ranks it among the small-cap stocks trading on the London Stock Exchange.

On the valuation front, the stock was trading at a trailing twelve months PE multiple of 25.2x.

A recent trading update for the year to March 31, 2019, showed like-for-like sales growth of 6.5 per cent. The company expected delivery of the growth plans and execution of the strategy into 2019 and beyond. The company also remained attentive on what works for consumers and delivering them the top products over the United Kingdom market. The company showed decent full-year results from the IPO launched. The company have a solid pipeline of new franchise store introductions and are assured of supplying the growth strategy of six new franchise stores during the year end.