Investors are tempted to buy inexpensive stocks as compared to their highly priced peers as being cheap; they can be bought in large numbers. Also, they have the tendency to rise at lightning speed, thereby giving impressive performance.

On that note, let us quickly take a peep into the five NZX-listed cheap stocks worth exploring in the next year. 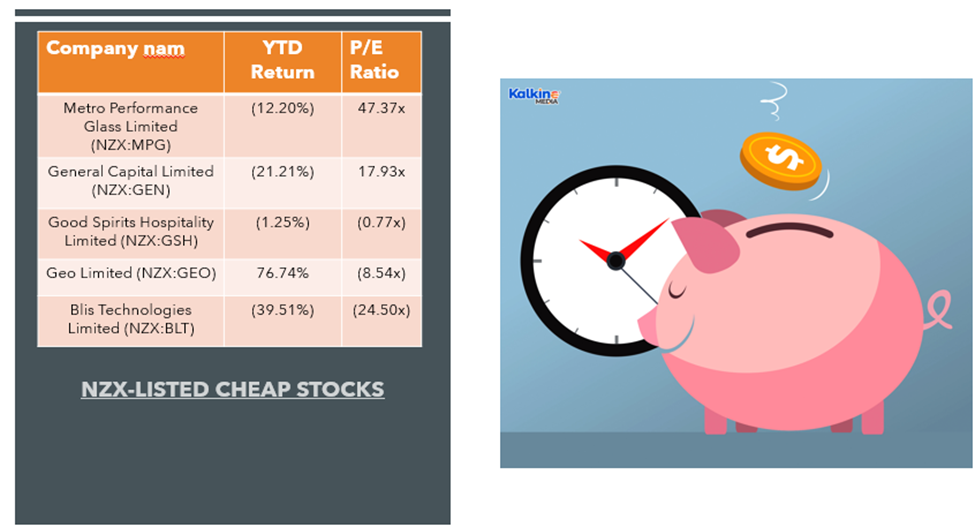 NZ’s famous processor and distributor of glass is Metro Performance Glass Limited. Recently, it had released its FY22 interim results, with a Group revenue of NZ$116.9 million, which was in line with the previous year.

Do Read: Why to consider 4 NZX infrastructure stocks before 2022?

However, there was a reduction in its NPAT, which amounted to NZ$0.4 million for the half-year period ended 30 September 2021, owing to significant impacts to Covid-related restrictions and pressing international supply chain costs.

With the lifting of lockdowns, MPG expects an improved and supportive environment for the construction sector, which would enhance its sales.

The Company is likely to provide guidance for its FY22 results in February next year.

General Capital Limited is a well-known financial services group across the country. It posted a solid half-year performance.

Both its NPAT and revenue saw an enormous growth of 1143% and 61%, respectively, for the period ended 30 September 2021, underpinned by strong support from its depositors, with a  23% rise in its deposit funding during the period.

Interesting Read: Do 5 NZX penny stocks have the potential to turn into multibaggers?

Good Spirits Hospitality Limited is a well-known name in New Zealand’s hospitality sector. It will be conducting a virtual Annual Meeting of the Shareholders on 20 December.

The Company intends to pass resolutions related to the re-election of its directors and to empower its Board to determine BDO Auckland, its auditors’ remuneration.

On 17 December, at the closing bell, Good Spirits Hospitality traded flat at NZ$0.079.

Related Read: Are these 5 best technology stocks to explore in 2022?

The proceeds would be utilised for accelerating both the business operations as well as growth strategies of GEN in domestic as well as in international markets.

Blis Technologies Limited is NZ’s renowned probiotic company. Its Marketing and eCommerce Director, Laura Grant, has sought to resign from her position due to personal circumstances.

Must Read: What are 5 small-cap NZX stocks examples?

She is likely to step down by March, next year.

BLT is actively looking for a suitable candidate for the said post.

Being affordable, investors tend to get attracted to these cheaply priced stocks for they carry the potential to perform well.