Small-cap stocks are those companies that have a market capitalisation of fewer than two billion dollars. Though small, these companies contain huge growth potential and sometimes offer life-changing growth unmatched even to large-cap companies.

Moreover, since these are low priced, these companies are quite popular among investors.

That said, let us now look at the five NZX-listed small-cap stocks.

In its Annual Meeting held earlier this month, resolutions were passed for the re-election of Brent Douglas King as a director of the company along with authorising the directors to fix the auditor’s remuneration. 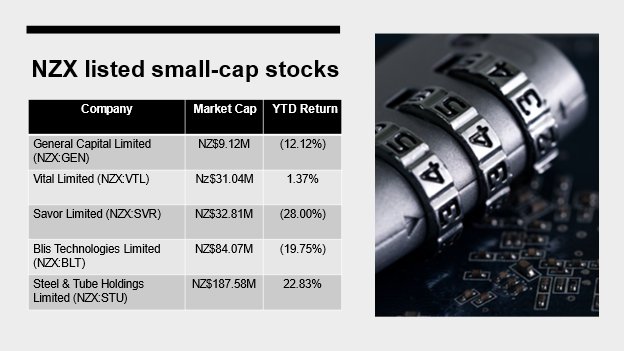 Operating for over 25 years, Vital Limited provides critical communication across New Zealand, along with offering services like digital radio, WiFi, and fibre.

The Company has advised its shareholders that 28 September is the last date for sending the director nominations.

Also, its Annual Shareholder Meeting will be organised on 19 October.

At the market close, on 17 September, Vital remained unchanged at NZ$0.710.

Must Read: How to diversify portfolio with NZX small-cap stocks?

Working in the hospitality space, Savor Limited is a big name in New Zealand's food and beverage segment. Earlier this week, the Company had informed its shareholders of adjourning its Annual Shareholders Meeting, which otherwise was scheduled to be organised as a physical meeting on 23 September.

Considering the prevailing condition in the country, Savor has postponed its meeting until restrictions would allow to organise a meeting in person, which is most likely to be held in November this year.

Details of the same would be intimated later.

On 17 September, at the end of the market session, Savor remained unchanged at NZ$0.480.

Headquartered in Dunedin, Blis Technologies Limited produces advanced oral probiotics. On the approval of its directors recently, the Company has announced issuing of performance share rights with no consideration to the select few senior management team members.

It is pointed out that the vesting period of the above is three years from the date the performance rights are being granted.

At the closing bell, Blis Technologies traded flat at NZ$0.066, on 17 September.

Interesting Read: Are these the 5 most active stocks on NZX?

Famous manufacturer and supplier of steel throughout NZ is Steel & Tube Holdings Limited.  Recently, the Company revealed to hold its ASM virtually on 30 September, owing to the uncertainties related to COVID-19-related lockdowns and restrictions.

Small-cap stocks often generate outsized returns, with careful business planning and conduct of their operations. They help in diversifying one’s portfolio, thereby cashing in on the growth opportunities presented by them.