Canadian Prime Minister Justin Trudeau’s grip on power remains largely unchanged. What the incumbent Liberal Party leader had expected to be a majority win has turned out to be a disappointment for Mr Trudeau.

The Liberal Party of Canada was leading in 158 seats of 338 seats in the House of Commons at 10 AM EST. This means that Mr Trudeau will secure win on enough seats in the 44th general election to form another minority government.

After a 36-day long campaign and an election worth C$ 610 million, the final seat tally wouldn't look very much different from the 2019 elections. The final tally of the Liberal Party was 157 in the 43rd general election.

Why Justin Trudeau failed to reach the magic number?

Reports suggest that the untimely polls were met with resistance with most voters as they failed to understand why Mr Trudeau opted for snap polls in the middle of the COVID-19 pandemic.

The Prime Minister had launched his campaign with a sizeable lead in the polls, however, voters seem to have expressed their anger with this decision to call for an early election. Canada has reported around 1.6 million positive cases of the coronavirus since the beginning of the pandemic and recorded over 27,000 deaths. 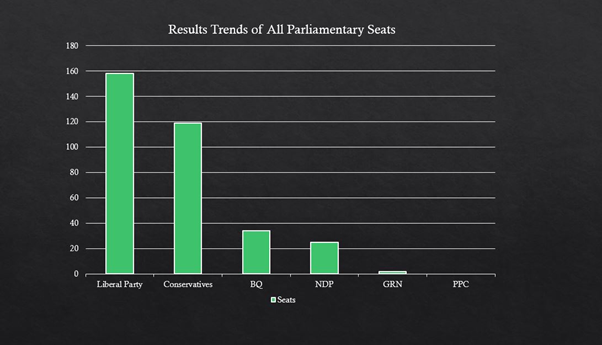 Another snap poll on the cards?

Before the elections, Mr Trudeau had claimed that if the Liberals or the Conservatives failed to secure a majority in the September 20 polls, Canada could see another snap poll in 18 months.

The Prime Minister had said this during an unofficial debate. If he meant this, then the country could see snap polls again in the next one and a half years as the party will be relying on smaller parties again.

The September 20 federal election is being dubbed as the most expensive election ever and that could attract negative publicity as the country has already faced huge losses due to the pandemic.

The snap polls were being considered unnecessary and if Mr Trudeau goes for the polls again, angry voters could ditch the Liberals this time and hand out victory to the Conservatives and the pandemic isn't over yet and there are fears for another wave of the pandemic.