A match made in heaven: Nobility brings esports and crypto together

Who hasn’t dreamt of living in a paradise at least once in their lives? And if someone had the opportunity to play a game in paradise, it would be an icing on the cake. A virtual platform combining crypto and esports, is no less a utopia that Nobility offers to its players, allowing them to compete with each other in a heavenly virtual playground.

Nobility brings esports and crypto together

Each week, Nobility conduct AMA (ask me anything) on Twitch and actively engage with the audience through social media platforms.

What makes Nobility so popular?

A team of blockchain experts, marketing specialists and serial entrepreneurs make up the Nobility team. The team is entirely transparent, and their identities have been 'doxxed,' which means their names have been made public.

Moreover, Nobility addresses both esports market and the crypto market, both the markets have exploded in popularity over the past few years. The esports sector and the crypto realm have many similarities; both came into existence only a few years ago and have grown enormously since then, becoming two of the world's largest markets.

Nobility considers that integrating the esports sector with the crypto sector is a match made in paradise. In addition, there are other benefits, such as the fact that esports is a worldwide market in which anyone from any country can join. 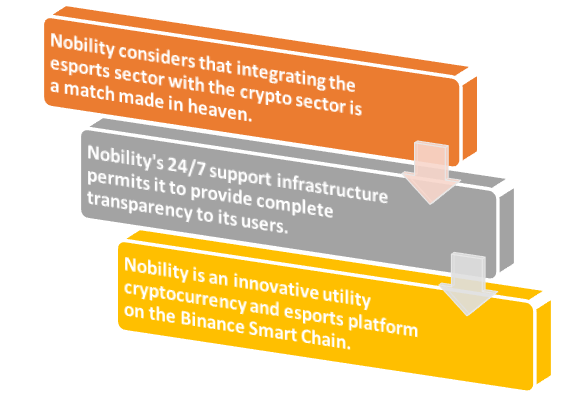 Related Article : Will El Salvador and Hungary's embrace of Bitcoin make it immortal?

The crypto world can sometimes be murky, but Nobility's 24/7 support infrastructure permits it to provide complete transparency to its users. In addition, people can contact Nobility's employees for assistance with things like buying/selling. People can also learn about its token at any time by visiting the company's website.

Tournaments in eSports: Nobility's smart contracts enable a 2% fee to be charged for all transactions made through the wallet, including, but not limited to, community activities, business growth, prize pools in Esports tournaments, manual burning, charity donations and scholarship funding.

Play-To-Earn: The team will also be developing its play-to-earn games and the other items on the roadmap to make Nobility more accessible. The games would be utilised to offer volume and utility for the token.

NFT Marketplace: The goal of the Nobility team is to develop the world's biggest NFT platform dedicated to eSports. Polygon support, Ethereum, Binance Smart Chain, and Nobility Token will all be available on the platform as the primary payment method.

Betting Platform: Another fantastic element of the Nobility ecosystem will be their eSports betting platform, which will permit you to gamble with crypto on the most popular eSports games like Rocket League, CSGO, Valorant, League of Legends, etc.

PvP Platform: Nobility is working on a PvP platform where users may play video games against one other for real-world prizes and benefits.

At present, many global esports competitions are larger than the NBA championships and Super Bowl. Many are also involved with esports organisations.

Nobility is the only token backed by esports organisations, giving it a significant advantage over competing projects. With virtual video games exploding in popularity, Nobility cryptocurrency has a lot of room for expansion and is poised to make a strong mark in the crypto space.