Withholding is a part of an employee’s wages that the employer withholds from the employee’s paycheck and pays directly to the state or local tax authorities.

It reduces the tax amount paid at the end of the year.

Employers who do not hold back the required tax may find themselves owing at the year end.

The amount withheld is decided by the income of the employee, marital position, dependent numbers, and jobs worked. The employee gets a tax refund if too much money is withheld during the year. However, he owes money to tax authorities if too little is withheld. Workers who fail to pay adequate tax on their earnings may face fines and interest.

Withholding tax is imposed on the majority of employees and the employer has the responsibility to transmit it to the federal, state or local authorities. 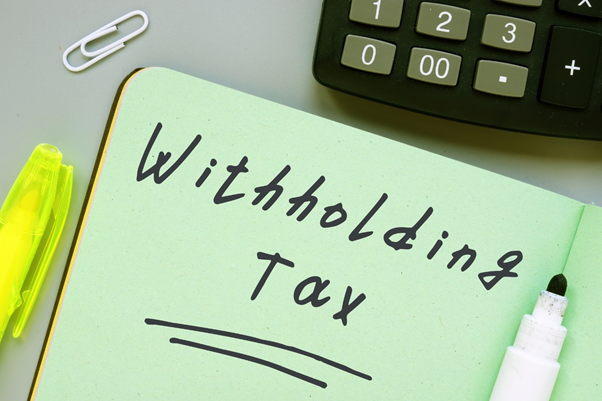 In the US, an employee who is starting with a new job has to fill an IRS Form W4. The form has many questions on the number of jobs and questions on dependents and filing status. These factors help the employer in deciding the withholding tax amount.

Why is withholding done?

The second advantage of levying withholding tax is that all transactions are monitored and scrutinised.

What is the difference between Federal Withholding and State Withholding?

The Federal Withholding tax system was launched in the 1940s to finance military operations at the time of Second World War. It speeded up the tax collecting process and made it simpler for governments to levy new taxes without the majority of people realising it.

When taxpayers withheld taxes automatically throughout 2021, they are not hit with a large annual bill at once.

The amount withheld from earnings for taxes owing to a taxpayer's home state is known as State withholding. The taxpayer may owe taxes to several states in some situations.

The State and local governments also have the authority to withhold wages, but solely on the basis of their own tax rates.

Both the state and federal income taxes can be held back but a person can't have both taxes withheld two times at both stages.

Should the Withholding be checked or changed?

For a variety of reasons, an employee should check withholding, including if he or she works a seasonal job, claims the child tax credit, or had a significant refund or tax payment the previous year.

In the US, IRS has a tool called Tax Withholding Estimator to check if the withholding tax needs any change.

How much Withholding should be claimed?

The amount an individual should withhold is determined by his/her unique situation. It depends on his income, dependents to claim, other sources of income, and other factors. An individual with just one income source and no dependents would usually choose a individual filing status with 1 allowance. However, a married pair with dependents will prospectively choose married filing together with many allowances.

What are other kinds of Withholding?

An individual who adds to a retirement account can do so with either after-tax or pre-tax money. If an individual did not pay taxes on the money that was deposited to the account, taxes would be withheld when the money is withdrawn from the account.

Taxpayers may also select to have a portion of their Social Security benefits withheld for federal income tax.

For example - In the US, a conventional IRA account owner is exempted from paying capital gains tax on any gain within the account. However, a part of any money withdrawn after retirement will be deducted as income tax. Taxes will also be deducted from 401k plan withdrawals on both the initial contribution and the profits component.

ACCC not averse to Amazon’s proposed acquisition of MGM

Should companies go for dual listings?

Barclays & Stanchart: Should you hold these stocks despite legal hit?

Are dividends taxable income in New Zealand? What is a withholding tax?

What are dividends? How do dividends work in New Zealand?

How can I invest in Tesla (NASDAQ:TSLA) stock from Canada?

The Sectoral Pulse || Why Are The Oil Prices Volatile In May?

What Led UK February Factory Output to Drop to Lowest Since May 2020?