Notably, they are all priced under 50 cents.

In the current market environment, when many investors are turning to safe investment options, others may find penny stocks an explorable option to earn quick gains. However, investors can easily lose their money as penny stocks involve high risk.

Here are five Canadian penny stocks under 50 cents that you can explore, keeping in mind the risk-reward of penny stocks.

Arena Minerals is a junior company exploring lithium and copper properties in South America. Lithium Americas Corp (TSX: LAC) owns a 17.5 per cent stake in this company since December (earlier, it was 12 per cent).

Stocks of Arena Minerals expanded by 326 per cent over 12 months. The mining stock was nearly 28 per cent down from a 52-week high of C$ 0.68 (April 5). The Relative Strength Index (RSI) for Arena Minerals was 55.17 on May 17, representing a balanced position between overbought and oversold.

Petroteq Energy is a TSXV oil and gas firm with fully integrated operations. The junior energy company developed a proprietary tech for oil extraction in Utah to provide high-quality oil. Petroteq facility has been designed with an operating capacity of 500 barrels per day (b/d) and an oil sands plant with a capacity of 5,000 barrels.

Reunion Gold is a junior gold company with a market capitalization of C$ 206 million. The gold firm accelerated its exploration program at Oka west project, Guyana, after receiving ‘strong’ results from the drilling of the Kairuni Zone. 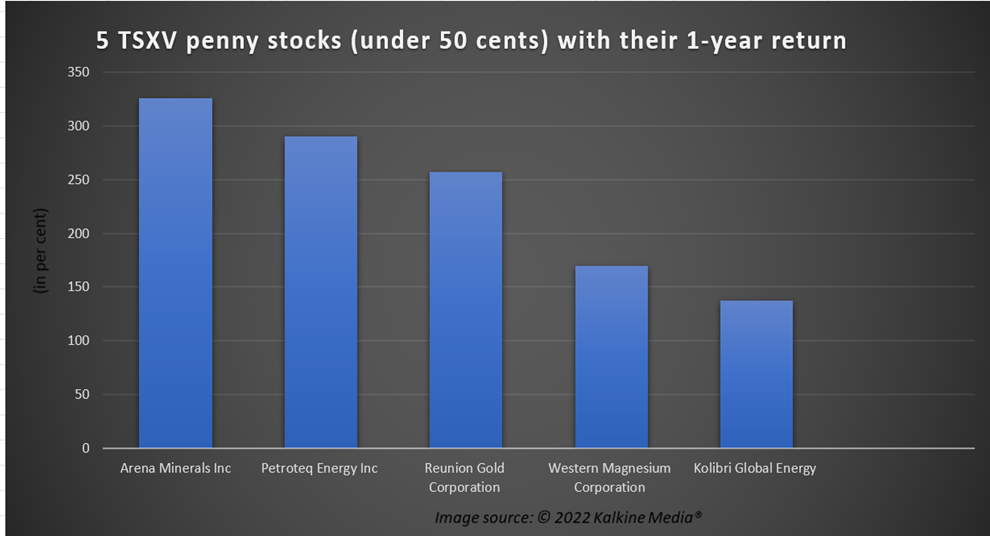 Western Magnesium Corporation is engaged in the production of magnesium metal. Recently, the company highlighted that according to new research by Acumen Research and Consulting, the global market for magnesium metal is expected to expand by nearly 50 per cent by 2028, which it believes will give it an advantage as it is building its production capacity.

Kolibri Global expanded its average production by three per cent YoY to 1,054 barrels of oil equivalent per day (boe/d) in Q1 2022. Higher average price and production led to a YoY surge of 70 per cent in its net revenue in the latest quarter.

Small investors aiming to benefit from the ongoing market volatility without digging too deep into their pockets can consider some of the Canadian penny stocks mentioned above. However, investors should invest the money they can afford to lose, as penny stocks involve high risk.