Crescent Point Energy Corp saw its stocks soar by more than 14 per cent on Monday, September 13, as the Calgary-based company released its second quarter results and revised dividend. 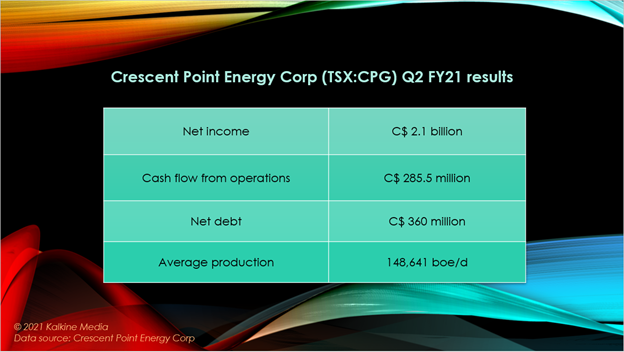 In the latest quarter, the company also shrank its net debt by about C$ 360 million in the wake of Kaybob Duvernay’s acquisition.

Crescent noted an average production of 148,641 barrels of oil equivalent per day (boe/d) in Q2 2021, which include about 85 per cent of oil and liquids. In the same quarter, it also upwardly revised its production guidance for this year.

In the wake of a significantly improved earnings report, Crescent decided to increase its dividend payout to C$ 0.03 per share for the fourth quarter of 2021.

The dividend is set to be paid on January 4 next year to shareholders who invest in the company on or by December 15 this year.

The revised amount brings the annualized dividend to C$ 0.12 per share, noting a jump of C$ 0.11 apiece from the present level.

Amid the COVID-19 pandemic last year, when many oil companies were suffering, Crescent had lowered its dividend to a quarterly rate of C$ 0.0025 per share. This amount is scheduled to be doled out on October 1 for the third quarter.

At a time when climate control initiatives are gaining momentum, Crescent claims to have enhanced its commitment to its Environmental, Social, and Governance (ESG) goals in the third annual sustainability report via programs.

The oil enterprise is also said to have received improved ratings from MSCI Inc for its ESG practices. These developments could power Crescent’s stock performance in the future.

As of now, CPG stock has grown by nearly 385 per cent year-to-date (YTD) and by about 153 per cent in the past six months.