The largest banks in Canada took a massive hit when the markets tanked amid the coronavirus pandemic in March. As they accommodated central bank’s lowered interest rates and deferred loan payments, substantial provisions for credit losses were created. At the same time, investors began to move away from bank stocks, resulting in their decline on the stock markets. But through all this, stocks leading lenders such as The Bank of Nova Scotia (TSX: BNS) and Toronto-Dominion Bank (TSX: TD) not only recovered from their March lows, but also gained momentum in their stock price. These two bank stocks are currently trending due to heavy volume activities on the Toronto Stock Exchange (TSX) and drawing investors’ attention.

Shares of bank stocks recorded a dip on Monday, September 29, following the release of a report by the International Consortium of Investigative Journalists (ICIJ). The report claimed that some of the top banks around the world indulged in moving around illegal funds. The S&P/TSX Banks Index is currently up 3.17 per cent quarter-to-date but has declined by 4.73 per cent month-to-date.

The Toronto-Dominion Bank filed its Form 6-K with the US Securities and Exchange Commission (SEC) on Tuesday, September 29, where it announced its plans to redeem all its six million outstanding shares for about US$ 156 million. It also signed on as the financing partner to American furniture company Loves Furniture & Mattresses earlier in September.

One among the ‘Big Six’ banks of Canada, the Toronto-Dominion currently has a market cap of C$ 111 billion.

Shares of The Toronto-Dominion Bank, often referred to as just ‘TD Bank’, are currently trending on the TSX, accumulating a 10-day average trading volume of 5.2 million.

Since sharply plummeting during the pandemic-triggered market crash in March, its stock price gained nearly 10 per cent in the last six months. It still records a year-to-date (YTD) decline of about 14 per cent, but its recent performance shows a rebound from the March lows. In the last three months, the scrips have climbed nearly five per cent in value.

The TD Bank saw a one per cent year-over-year improvement in its revenue in its third quarter ending 31 July 2020, amounting to C$ 10.67 billion. Its adjusted net income, at C$ 2.3 billion, recorded a 46 per cent quarter-over-quarter (QoQ) increase but a YoY drop of 30 per cent. Its adjusted earnings per share was up 47 per cent QoQ to C$ 1.25. 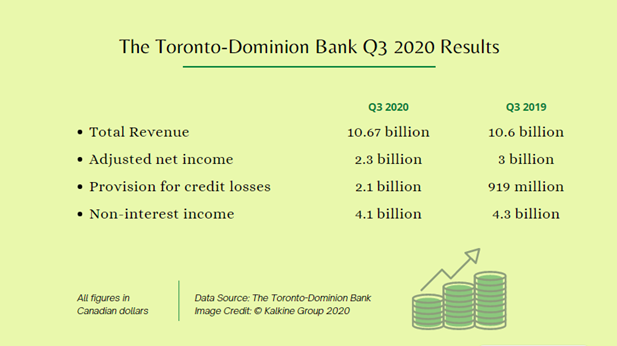 Canadian mutual fund company Brompton Split Banc Corp recently invested in the six largest banks in the country, including The Bank of Nova Scotia. Often described as Canada’s ‘international bank’ because of its acquisitions across the world, it recently appointed former deputy governor of the Bank of Canada Lynn Patterson in its Board of Directors.

The Bank of Nova Scotia, which operates as ‘Scotiabank’, presently has a market cap of C$ 67 billion.

Read: What are the Top Banking Trends for 2020

Shares of Scotiabank currently ranks high on the TSX Volume list due to its heavy trading activities. In the last 10 days, the bank garnered an average trading volume of 5.9 million.

The bank’s stock price nose-dived to its lowest point this year during the March market crash. The fall pulled down its overall performance in 2020, registering a nearly 24 per cent YTD decline. However, its scrips have rebounded since the March lows of C$ 46.72 (March 24), climbing nearly 20 per cent in the last six months.

Though it remains much below its pre-pandemic levels in February, The Bank of Nova Scotia stock price increased by nearly three per cent in the last three months as well.

The bank noted that its latest quarter results were “significantly impacted” by pandemic-triggered high provisions for credit losses, which surged to C$ 2.1 billion in Q3 2020 from C$ 713 million in Q3 2019.