Cameco (CCO) stock up 14%! Why is the Canadian uranium firm trending?

Cameco Corporation is trending hot in the Canadian stock markets following some positive announcements, which also spurred its stocks to jump by over 14 per cent on Wednesday, February 9.

Cameco, headquartered in Saskatoon, Saskatchewan, is one the largest uranium producers with operations in the United States, Canada, Asia and Australia. The company's operations cover include exploration from nuclear fuel cycle to fuel production.

Why is Cameco (TSX:CCO) stock trending?

Cameco, on Wednesday, released its fourth-quarter earnings for the fiscal year of 2021 along with the news that it would restart its uranium operations at McArthur River/ Key Lake.

The company said that it is planning to produce 15 million pounds per year at the site starting from 2024, which is 40 per cent down from the operations' annual licensed capacity.

The uranium giant saw its revenue amount to C$ 465 million in the latest quarter, down from C$ 550 million a year ago.

However, despite operational setbacks, the C$ 11-billion market cap company announced that it is increasing its annual dividend by 50 per cent for the fiscal year 2022. 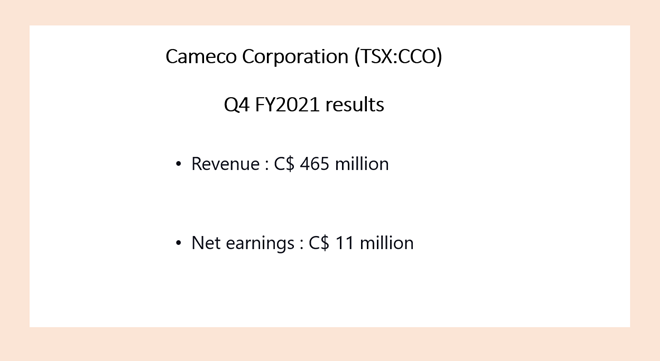 Cameco stock galloped almost 19 per cent in the past one week. The uranium stock climbed by over 38 per cent year-over-year (YoY).

CCO stock closed at a value of C$ 28.84 apiece on Wednesday, with 2.85 million shares exchanging hands.

Cameco stated that its 2022 production plan "continues" to face risks associated with the coronavirus and the resultant supply chain woes.

However, the company added that it remains optimistic about its long-term value in the fuel chain and net-zero carbon transition.