Cameco Corp (TSX: CCO, NYSE: CCJ), said to be one of the biggest uranium producers in the world, saw its stocks spike by 0.48 per cent on Wednesday, October 20, gathering a trading volume of 1.21 million and a closing price of C$ 33.1.

Is Cameco Corp (TSX:CCO) a uranium stock to buy?

Its US stocks listed on the New York Stock Exchange (NYSE), on the other hand, also rose by nearly a per cent on Wednesday.

What caused this uranium stock to jump? Let’s find out.

The Saskatoon, Canada-based uranium player had no corporate updates on Wednesday, but last week, on October 13, Cameco said that it is exploring potential partnership opportunities with Terrestrial Energy.

The potential deal would be to deploy the nuclear power plant developer’s Integrated Molten Salt Reactor (IMSR) Generation IV facilities, among other things.

On Thursday morning, October 21, Cameco Corp also published its 2020 ESG (environmental, social and governance) Report, which detailed the implementation of its ESG principles and practices, its strategy, performance, etc.

This year, the uranium stock has catapulted by almost 91 per cent.

In October alone, CCO stock has recorded a growth of over 18 per cent, while its three-month growth is nearly 50 per cent. 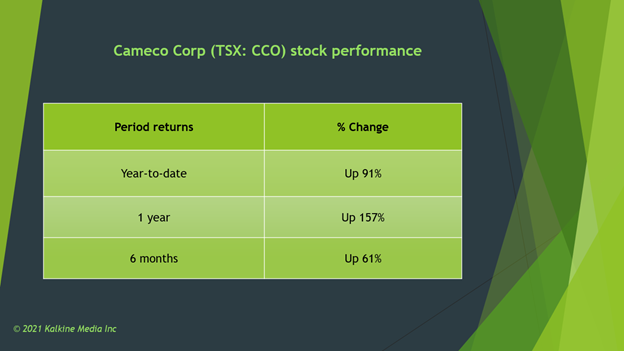 Its dividend of C$ 0.08 per piece, which is paid to its shareholders once a year, was paid on December 15 last year.

As of now, Cameco is expected to release its financial results for the third quarter of 2021 on October 29 this year.

After noting a bit of lull, uranium stocks sprang back into action in October following Sprott Physical Uranium Trust (TSX:U.UN) announcement of two bulk purchases of uranium. This development, however, was not the only fuel that boosted uranium stocks.

Reports about France and Japan mulling over building nuclear reactors is likely to have coaxed uranium stocks to rise further as well.

With all this going on, uranium stocks like Cameco could be one to keep an eye on.