Prime Minister Justin Trudeau will return for a third term, but he has failed to secure a majority in the parliament. At the time of writing this, Trudeau's Liberal Party was leading in 158 of the 338 seats in the House of Commons, a little change from the last elections in 2019.

Mr Trudeau had opted for snap polls hoping that his party would win 170 or more seats. The current trends indicate that the Prime Minister will have to rely on smaller parties again and this time also the parliament would remain fragmented. Meanwhile, the Conservatives under the leadership of Erin O'Toole were leading on 119 seats at 7:30 AM EST.

While PM Trudeau had made many promises before the elections, we will be focusing on his promise of imposing a ban on foreign real estate investors. 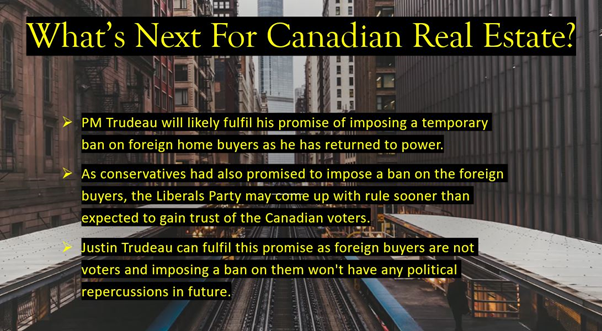 What is the ban on foreign home buyers promise?

Canada's housing market crisis has been ongoing for the past few months. It has left the domestic buyers priced out.

Before the snap polls, PM Trudeau made a promise to the Canadian nationals that he would impose a temporary ban on foreign home buyers if he returned to power.

Also Read: What to consider when creating post-snap election portfolio in Canada

The Prime Minister had said that domestic buyers should not lose the bidding war to foreigners as they are mere speculators. In Canada, foreign real estate buyers are majorly from China and Hong Kong, and it is alleged that they are responsible for rising housing prices.

As it is clear now that the Liberals would be forming the government in Canada, it is expected that Mr Trudeau would fulfil this promise.

The Prime Minister could do so easily as foreign buyers are not voters and imposing a ban on them won't have any political repercussions in future.

Although the Prime Minister must be hoping that this move will solve the crisis, the Canadian Real Estate Association (CREA) seems to suggest otherwise. According to the association, the rising home prices could be due to a lack of housing supply.

So, if the government wants to tackle this issue effectively, it seems they will have to ensure that the housing supply is sufficient for domestic homebuyers.