The Lachlan Fold belt of the New South Wales is among the most prospective exploration zones of Australia. The Lachlan fold belt is an established Tier-1 mining region hosting significant operational mining assets such as the Newcrest’s Cadia and Ridgeway operations, as well as mega exploration discoveries such as the recent Alkane Resources’ mega Boda discovery.

Sultan Resources Ltd (ASX:SLZ), a Gold and Base metals explorer, recently announced the signing of the acquisition agreement for Colossus Metals which holds key gold and copper exploration tenements in the East Lachlan Fold belt of the New South Wales. 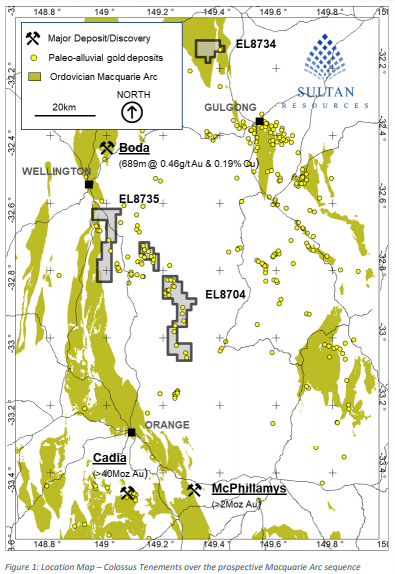 Colossus metals holds exploration licenses for 3 tenements namely, EL8734, EL8704 and EL8735, stretching over an area of 330 square kilometres. The au courant audience must know that East Lachlan Fold belt is one of the hottest trending and most sought-after exploration zones hosting potential of discoveries for multiple payable commodities including gold, copper, zinc, lead, silver and tin. It is worth noting that, almost all mining exporters, right from the industry majors to the newest junior players in the market are seeking an exploration ground in the region.

Securing prospective exploration zones in Australia’s premier porphyry Au-Cu district is no ordinary feat especially after the recent discoveries that put the region in the limelight. The Sultan Resources’ tenements are located between the Alkane’s Boda, Newcrest Cadia & Ridgeway operations (>40 Moz Au), one of the largest gold mines of Australia, and the Regis Gold’s McPhillamys Gold Project (>2 Moz Au).

The mining world first took notice of the Lachlan fold belt, when Newcrest mining’s Cadia valley Gold operations commenced operations in 1998. Today, the Cadia Valley and Ridgeway operations has evolved into a series of open cut and underground mining operations, producing over ~913,000 ounces of Gold and 91 kilotonnes of Copper with an All-in Sustaining cost of only $132 per ounce of gold, against the times when gold prices have skyrocketed and are trading in the range of >$2,700 an ounce. Presence of the mega gold operations in the gold mining district as Sultan’s tenements further boosts the perspectivity of the project.

In the recent times, the fold belt was highlighted by the discovery at the Alkane’s Boda district in 2019, which initially resulted in an intercept of 507 metres with 0.48 g/t gold and 0.2% copper, 211 metres downhole. A recent follow up exploration program in February 2020, intercepted 689 metres at 0.46g/t gold, 0.19% copper, 402 metres downhole.

The presence of huge exploration projects and world-class operating assets not only indicates the huge geological potential of the region and Sultan’s tenement but also suggest the presence of excellent mining infrastructure in the mining-friendly jurisdiction of NSW.

Regional and local geology of the Sultan’s Tenements

The high priority “Big Hill” porphyry target is a Cadia style mineralisation in the Molong volcanic belt, with paleo-placer gold mineralisation hosted by the same host rocks as the Alkane Resources’ Boda and Newcrest’s Cadia-Ridgeway operations. The geological similarity maximises the possibility of a large-scale Au-Cu mineralisation with high metal grades. Colossus meets the criterion for expenditure over the tenements and seeks renewal of EL8734 and EL8735 for which the 2-year renewal date is in April 2020. 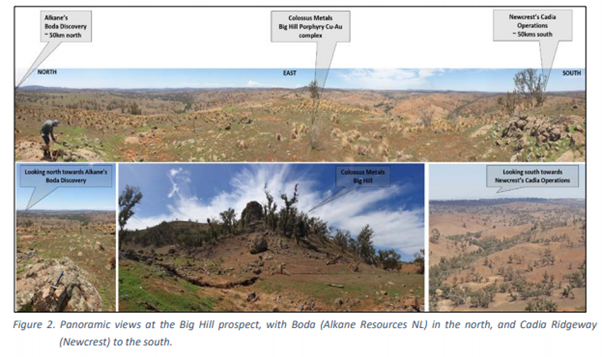 The tenement spreads over extensive deep Pb-Au occurrences along the Macquarie River valley, located north of Australia’s first gold discovery. The tenement includes the Hansell alluvial field which has been subjected to gold mining in the past (1895-1935). The regional deep- lead gold mineralisation is severely underexplored and presents an opportunity for the explorer.

The historical explorations are quite dated and included industry biggies such as BHP (1970s) and Sunshine Exploration (1985) on the license confirming the presence of gold-bearing conglomerates in the alluvial goldfield. Such prospectivity with limited resources suggests the requirement of modern exploration in the tenement.

The EL8734 “Tucklan” is located to the southwest of the Alkane’s Boda discovery. The tenement in the past has registered minimal modern exploration and given its proximity to the interpreted porphyry Cu-Au-Mo deposits in the Tuclan formation, presents an outstanding exploration opportunity.

The proximity and geological similarity to major gold-copper mining assets indicate substantial exploration opportunity in the region. Key targets for the future program have already been identified with works programs ongoing. Vendors with extensive mining exploration in the region have been involved in the project. Sultan anticipates immense value generation opportunities on its investment in the East Lachlan fold belt.