The Company has announced further significant gold results from Old Town Well deposit that was identified as third new gold deposit by the Phase 1 RC drilling campaign in the first half of CY2020. The Old Town Well satellite deposit is located just 600m north of the Company’s Sandstone gold processing plant within permitted Mining Lease M57/128.

The Company has declared grades of up to 20.6 g/t gold from drilling of 44 RC holes (2,179m) on Old Town Well deposit under its Phase 2 RC drilling campaign. These new assay results comprise broad, consistent, shallow drill intercepts over a 60m aggregate width and 340m strike length. 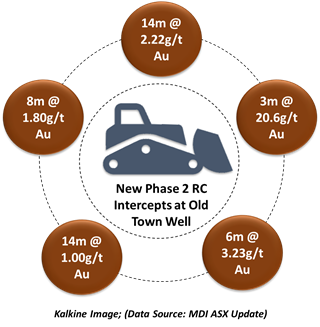 Amongst these intercepts, 3m at 20.6g/t Au is a remarkably pleasing outcome, as it exhibits the presence of locally higher grades at Old Town Well deposit that have not earlier been apparent to any significant extent.

The assays from Phase 2 RC drilling complement those better drill intercepts produced in the Phase 1 RC campaign at Old Town Well, including:

The Phase 2 RC drilling has discovered that saprolite gold mineralisation at Old Town Well deposit is closely linked with a steeply northwest-dipping and northeast-trending felsic dyke that intrudes ultramafic rocks.

The gold mineralisation at the deposit seems to be connected with zones of quartz veining and silica-carbonate-pyrite alteration that predominantly occur within or immediately adjacent to the dyke. Consequently, the entire deposit is covered by a near-surface, gold mineralised laterite blanket.

Given the broad zones of quartz veining and intense silica-carbonate-pyrite alteration in the primary zone at Old Town Well, Middle Island observes drilling to date as peripheral to far more substantial gold mineralisation at depth, beyond the scope of the ongoing drilling campaign.

The Company expects Old Town Well to represent a larger, but modest grade, low stripping ratio, oxide open pit gold deposit, most of which is shallow, comprising a blanket of mineralised laterite from surface. The Company further anticipates this deposit to contribute towards a positive feasibility study outcome.