Today on June 13, 2019, APN Industria REIT (ASX: ADI) announced the successful completion of Security Purchase Plan (SPP) on June 11, 2019. The SPP was oversubscribed as APN received applications for around $26.5 million. As per the announcement on May 20, 2019, the company was seeking ways to raise around $5 million under the SPP, and with the oversubscription, the Board has utilised its discretion to increase the amount raised under the offer close to $20 million. A scale back policy will be implemented as per the terms and conditions in the SPP booklet. As per the policy, the eligible securityholders who applied for $5000 or less of securities, will be issued securities to the value applied for; amounts above $5,000 will be issued with securities to the value of $5,000 plus approximately 58% of the amount above $5,000.

Around 7.3 million of new stapled securities will be issued under the SPP at an issue price of $2.73 per new security. Fund Manager of APN Industria REIT, Alex Abell, stated that the encouraging demand from the existing investors in supporting its growth is a strong endorsement of the management’s strategy and approach. The additional equity will be utilised to reduce gearing by around 2.5% and provide capacity for further growth. The funds from operations (FFO) guidance remains consistent with the previously guided range provided on May 13, 2019, of 3.5% to 4.0% growth for FY19 and 2.5% to 3.0% for FY20. The new securities are expected to be allocated on June 18, 2019, and trading of those securities are expected to commence on June 19, 2019. The company intends to dispatch refunds and holding statements to its shareholders on or about June 19, 2019. The new issued securities (under the SPP) will rank equally among the existing APN securities and will be entitled to the full distribution for the quarter ended June 30, 2019.

In a previous update, Growthpoint Properties Australia and its entities changed its voting power in the company from earlier 18.16% to 17.04% effective from May 17, 2019. On the same date, Legg Mason Asset Management Limited and its corporate bodies became a substantial holder in the company with 5.32% voting power.

H1 FY19 (ended on December 31, 2019) Key Highlights: The company’s Funds from Operations (FFO) increased by $0.5 million to $15.3 million or 3.3% on a per security basis to 9.4 cents. APN reiterates its FFO guidance to be in the range of 19.05 cents to 19.25 cents per security for FY19. Its net profit for the period increased by $0.8 million to $14.6 million as compared to the previous corresponding period, majorly due to the contracted fixed uplifts across the portfolio, leasing, and two new acquisitions at 1 West Park Drive, Derrimut and 13 Ricky Way, Epping.

APN’s net tangible assets (NTA) increased by $0.7 million, with the valuation gains of $3.1 million, partially offset by the stamp duty costs related to the acquisitions and derivative fair value movements. 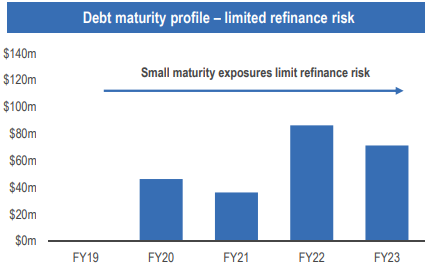 Cedar Woods Properties Limited (ASX: CWP) has an engagement in property development and investments. The company recently announced that the Westoz Funds Management Pty Ltd has ceased to be a substantial holder in the company effective May 21, 2019. In a previous update, CWP informed the market that it has entered into a conditional contract to acquire 133 Salvado Road, Subiaco, which was a former TAFE site, from the city of Subiaco for $15.05 million plus GST. The contract will enable CWP to be the preferred partner to purchase the 1.4-hectare site situated 4 kms from the CBD in the sought-after western suburbs of Perth. The company recently increased its pre-sales by 8% to $249 million as compared to the previous corresponding period.

During the period, several construction works were completed by the company, with many others expected to complete by the end of the financial year. Its sales continued in the four states, including strong leverage to improvement in the Western Australian market. As per its investment strategy, CWP witnessed a rise in quality development sites, which are finding it difficult to get finance, providing the company with a lot of attractive buying opportunities.

The company’s balance sheet remains robust with the net bank debt-to-equity, which is expected to remain within the lower end of the company’s targeted range during the second half, and substantial undrawn capacity under current bank facilities available to fund growth. Cedar Woods’ significant undrawn facilities and strong support from financiers give the company a competitive advantage as it investigates potential acquisitions across Queensland, Western Australia and Victoria.

With a solid increase in earnings on track for FY19, supported by a strong first half, the company remains positive about its future prospects. The company is anticipated to settle several projects before June 30, 2019. The property market segment remains challenging nationally and has deteriorated in recent months, with slower sales volume for the company, providing the potential for weaker FY20 earnings. However, with strong pre-sales numbers, the company is well positioned to weather the current market conditions and perform strongly over the medium term. A good number of new projects are expected to support the company’s earnings in fiscal year 2020, which includes Gardenia Apartments at Jackson Green, 101 Overton Road, Botanica Apartments, and 107 Overton Road. 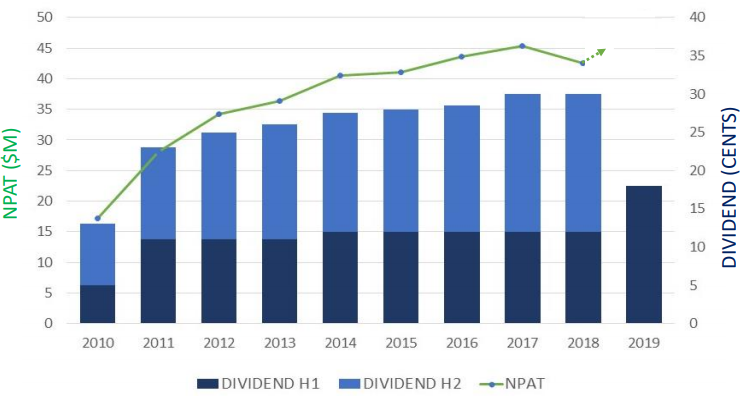