Bass Metals Ltd (ASX: BSM) is a company operating in the mining sector. It engages in the exploration of industrial mineral concentrates. The company was listed on the ASX in 2005 and is headquartered in Richardson St, West Perth, WA, Australia.

In addition to its existing mineral resources, Bass Metals has identified another potential target, which will be a material addition to the pool. The company is planning to increase its resource inventory for the future development of large-scale mining and processing operations.

The company embarked a brownfield Exploration Target for its fully-owned Graphmada Large Flake Graphite Mine located in Madagascar. Bass Metals recently assessed the mineral potential of the area.

The Graphmada Graphite Mine has an estimated exploration target of 86-146 million tonnes of additional graphite mineralisation, which is said to have 4.1mt â 8.4mt of graphite. 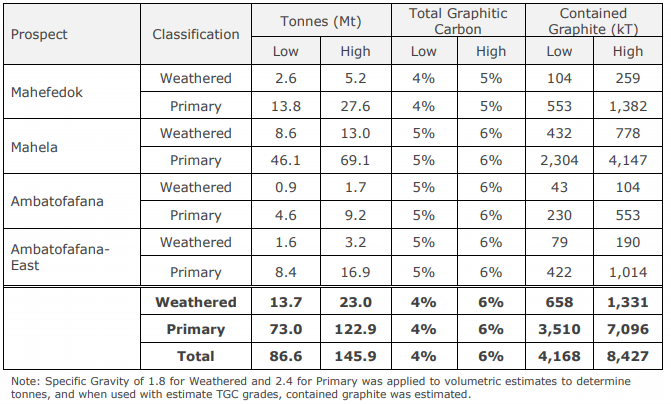 Mahefedok, Mahela and Ambatofafana are three graphite prospects found to be within Bassâ Permit PE26670. These are believed to have historically mapped graphitic gneiss units. The above prospects have been identified as a result of comprehensive mapping and sampling within Bassâ permitted area.

A large area, similar to the exploration area of interest, is not covered in the Exploration Target estimate. This area falls within the permit and is covered by alluvium of about 5-10m in thickness characterised both by weathered and primary graphitic gneiss. The Target does not include the Andapa Discovery (covered by Permit â PE24730) or any possible extensions to the Loharano Deposit.

With the extensive data of historical exploration and drilling being conducted currently at two prospects, namely Mahefedok and Mahela, Bass is of the view that the broader Graphmada area contains additional and significant graphite mineralisation. It has spotted the potential of the region and is keen to develop an effective exploration and future production expansion strategy to exercise the above initiative.

Bassâ Vision and Strategy behind the program

Its strategy of future expansion backs the above-targeted mineral exploration by Bass. The company, with the identification of additional mineral resources, seeks to plan for further development of large-scale mining and processing operations.

The company is currently aiming to upgrade and expand the mineral resource of the Mahefedok Deposit. The drilling for the same is complete, and samples from the same are being processed at specialist graphite laboratory of Bass Metals. Subsequently, it began diamond drilling at the Mahela prospect. Following the Mahefedok and Mahela drilling, the company will initiate an augering program for the Ambatofafana Prospects early in 2020.

With the program in place, Bass aims to increase its resource inventory for future development while continuing its current mining and progressing operations.