Global media sentiment and uncertain events impact daily stock returns in both emerging and advanced markets. Since time immemorial, markets across the world have had witnessed volatility mainly driven by news and events in the global markets. In the present time, the Australian economy is increasingly exposed to the global markets, especially after the traction of global investors and international trade relations, which means that investment decisions are driven by and depends on the development/events in both domestic and foreign markets.

In this article, we would discuss two international events that are doing the rounds in the business world, currently- the confirmation of the death of Islamic State leader Abu Bakr al-Baghdadi and the British Prime Minister Boris Johnson’s latest stance on Brexit.

In the light of these contexts, we would take a look at the Australian share market’s performance.

One of the World’s Most Wanted Man Confirmed Dead

Arguably the world’s most wanted man is dead, as per the proud President Trump, who stated that something very big happened as US brought down the terrorist leader to justice. Having achieved this milestone, he thanked Russia, Turkey, Syria and Iraq for their support.

Sources believe that the raid was apparently a high-risk operation including a team of American Special Operations troops and an assault on a militant compound, after the U.S. intelligence tracked the militant leader. Experts digging deep in the matter stated that arrests and interrogation of people close to Baghdadi helped yield his whereabouts and other information, which was eventually provided to the Americans.

The news is supposedly a huge blow to the jihadist group and a significant milestone in combating the global crime history.

The Continued Brexit Crisis- UK To Get A Three-Month Brexit Extension?

Prime Minister Boris Johnson was forced to request a further extension for Brexit under the Benn act. In this regard, Mr Johnson is hoping to secure an early election and increase his majority so that he can get his Brexit deal through.

Media sources suggest that the European Union is prepping to sign off on a Brexit extension up till 31 January 2020, wherein UK would have an option to leave earlier if the deal is approved. Given this update, the no-deal Brexit on 31 October is likely to be off the table, as insisted by the opposition party leaders on the grounds that it was a prerequisite for a general election.

The general election, a motion under the Fixed-term Parliaments Act (FTPA) would be held on 12 December 2019 and would require two-thirds of MPs and Labour to vote for it.

As on 30 October 2019, a day prior to, when the UK is due to withdraw from the EU and the day that parliament would vote on whether to conduct a snap general election.

Besides this and with regard to Baghdadi’s death, Mr Johnson stated that the news was an important moment, even though the fight against terror is not yet over.

Australia is amongst one of ISIS’s victim lands, besides other economies like Russia and Egypt. The news of Baghdadi’s death is hence catching media and local eye’s attention. Furthermore, as Britain lurches towards a no-deal Brexit, market enthusiasts are wondering about what the diabolical outcome for Britain will mean for Australia- a threat for an already meek Australian economy? A push towards recession? Just a little risk to the general economy?

A no-deal Brexit would imply the re-establishment of border checkpoints amid EU and the UK and one should be aware of the fact that Europe is one of Australia’s top trading partners.

Amid these macro events, let us look at the performance of the Australian Securities Exchange, during the trading session, on 30 October 2019: 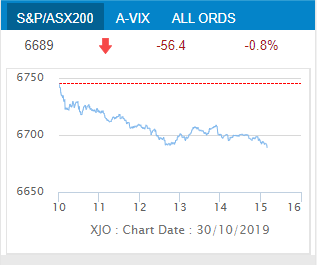 The benchmark S&P/ASX 200 is trading at 6,699.9, down by 45.5 basis points or 0.07% (at AEST 2:00 PM). The consumer discretionary, energy, health care, industrials, metals and mining, resources, communication services and utilities were the sectors that were trading in red.