The major discoveries and large-scale, low-cost mining operations in the belt have caught the eye of the mining investors. The tables are turning for the Lachlan fold belt and are currently, the hottest exploration mineralisation zone in the Australia. The potential for new discoveries is high with the possibility of multiple payable commodities including gold, copper, lead, zinc, silver and tin. 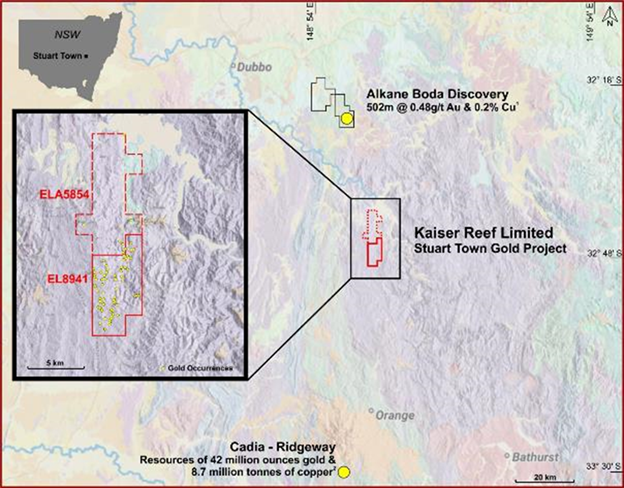 The region around the Stuart Town Gold mining district hosted 80+ mining operations in the past. The history of the mining property goes back to the mid-nineteenth century with more than 170,000 ounces of gold production reported in the period between 1875 and the early part of the 20thcentury however the bulk of the mining occurred between 1850 and 1875 when no records were kept. The Lachlan Fold Belt is seriously underexplored, and the explorers and miners are now taking notice.

Stuart Town Project area covers a series of Silurian and Devonian sediments (Cunningham Formation) with gold mine to date existing as lode-style veins or as alluvial concentrations with gold associated with pyrite and arsenopyrite, galena, chalcopyrite and sphalerite.

The historic production experienced an ore grade of 2 to 3 grams per tonne with underground mining restricted to a depth of 65 metres as per the documentation.

Historical production often documented head grades of sorted ore at two to three ounces of gold per ton. Underground mining has not been documented below 65 m depth. The Gold mineralisation is spread at irregularly along 6 km (approx.) of the Western Shear and 2 km of the Eastern Shear, in relatively narrow quartz veins. The Kaiser Wilhelm Mine was the largest recorded producer from which 112 kg of Au was mined at an average reported sorted grade of 24 g/t Au. The high grade of the historic operations encourages the Kaiser Reef to uptake and accelerate the project.

The Project overlaps an interpreted intrusive unit, as modelled by Kratos Uranium in collaboration with Freeport in 1984. Carpentaria Exploration (owned by MIM Limited) in 1985 described the gold source as a potential felsic intrusive body at depth at Stuart Town as a result of on ground magnetic and gravity surveys, airborne magnetic and radiometric data along with the assay from soil sampling.

Limited or insignificant drilling has been conducted on the mining property so far and a presence of an intrusive system with estimated dimensions of 1,200 m across, an estimated vertical range of 1,700 m roughly 200 metres downhole from the ground surface.

With the absence of recorded mining, beyond 65 metres, and deep exploration drilling, untouched gold mineralisation could be explored with the presence of other base commodities, given their presence in the neighbouring properties.

Kaiser Reef in close coordination with, Snowden mining consultants, plans to follow a systematic exploration strategy and came up with the exploration plan proposing the following steps-

The independent consultants recommend the structural geology work to commence along with the proposed geophysical, mapping and geochemical samplings.

The regional presence of Cadia (Cadia East and Ridgeway operations) and the recent exploration results of Alkane’s Northern Molong project in comparable geology, along with the geological similarity to the Ravenswood property, strongly support the prospectivity of the Stuart Town project. The current time seems perfect for the development of the Stuart Town mining district with strong gold prices and a rush of exploration on ground in the belt due to exceptional exploration results by the neighbouring properties.

Kaiser Reef’s IPO, one of the leanest IPO of the year, will fuel Stuart Town Project to begins its vision to potentially establish a long life, low cost gold operation. We wish success to Stuart Town and Kaiser Reef with the question in our mind “Is Stuart Town, the next Cadia in making?”