In its IPO filing on Friday, US online mattress retailer Casper listed a usual risk factor in detailing the company’s outlook; social media influencers. The unicorn start-up was launched in 2014, with a business model that cuts expensive showrooms from the process of selling mattresses, instead delivering online purchases quickly and in a convenient box. The company owes much of its market share to endorsements from popular social media users, known colloquially as “influencers,” with whom Casper has partnered financially to advertise the online store.

Influencer advertising is a multibillion-dollar industry that has grown with the social media giants that enable it. Like other forms of sponsored content, this type of marketing involves celebrities, content producers, or other personalities promoting products though their online platform. Though in the past it wasn’t always public information whether a social media post was paid for or not, many jurisdictions now have legislation that requires such disclosure.

The power of social media influencers has been valued by young market entrants seeking non-traditional advertising avenues to disrupt industry giants. If a company is offering useful, attractive innovations, they can gain traction on social media in a way that can deliver big returns against spending. For an online company like Casper, it represents a way to reach consumers directly and relatively cheaply. Casper was championed early by TV personality and businesswoman Kylie Jenner, who currently has one of the most followed Instagram accounts in the world with over 150 million followers, and is at least partly 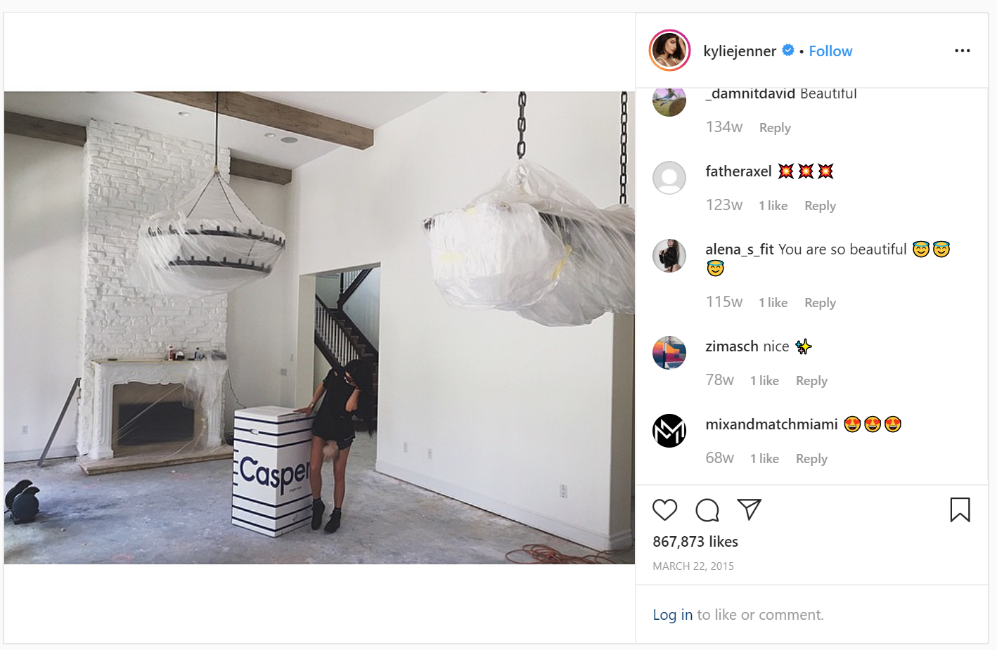 However, this first look into Casper’s books has revealed the costs that may come with advertising in this way.

What are the risks

Casper has identified a number of possible exposures from being publicly aligned with the influencers who advertise for them. In their IPO filing, they suggest that there is a risk that any negative publicity that an independent influencer may bring on themselves could be shared by the company. Social media influencers like the Kardashians are known to court controversy to boost their reach, which may work well for self-promotion but can damage a public company’s credibility with its stakeholders. Kylie Jenner herself was in the news only last week for perceived hypocrisy in a series of deleted Instagram posts, in which she mourned the loss of animal life in Australia’s bushfire crisis, and then shortly afterward shared an image of her $1450 real fur slippers.

“Influencers with whom we maintain relationships could also engage in behaviour or use their platforms to communicate directly with our customers in a manner that reflects poorly on our brand and may be attributed to us or otherwise adversely affect us,” Casper said in their filing.

There is also the implication that an influencer’s changing or souring relationship with the firm’s products could reflect badly on Casper’s image and its bottom line. If an influencer with a lot of public sway decides they no longer support a product, and is past the terms of their agreement, they can wreak just as much harm as any good that came in the first place.

Another identified risk is that the practice of influencer advertising will face increased scrutiny in the future, as regulators move to bring more transparency to the industry. Internet watchdogs in the US and Europe have become more stringent in their guidelines for influencers’ transparency about paid partnerships. One of the risks of using such an untested marketing model is that Casper’s influencers could “subject us to regulatory investigations, class action lawsuits, liability, fines or other penalties,” as they described the situation.

How will this affect the IPO?

Though interesting, marketing strategies are unlikely to be the main talking point of Casper’s IPO, which is to be one of the first of the currently notorious unprofitable unicorns to hit the trading floor in 2020. This type of IPO made headlines last year after the failed listings of high profile companies such as Uber, WeWork and Lyft, prompting other unicorns who had been expected to go public to push back their offerings. These companies are likely to pay close attention to how Casper fairs, as it may prove a litmus test for how willing Wall Street is to back these riskier stocks.

The prominence of Casper’s IPO means that other companies may heed this listing as a warning against using influencers. If having influencer marketing on the books has a negative impact the company’s market valuation, then it could lead to a revaluation of the service influencers are providing.

Who else will be affected?

There have been other brands who have identified the risks associated with influencer marketing. In June, online fashion house Revolve said in its listing documentation, that if they were not able to develop and sustain positive relationships with their influencers, their ability to promote and continue awareness of their sites and brands and leverage social media platforms to drive visits to their sites might be poorly affected.

Influencer marketing is very popular in the fashion, beauty, food and travel industries, although as proven by Casper, it can be used very effectively across a broad range of consumer goods and services.

Airbnb, the most anticipated IPO of 2020 that hasn’t even been announced yet, is a prolific buyer of sponsored posts from influencers and celebrities. They were one of the first and biggest players in the game, growing their exposure in the past five years by accessing hundreds of millions of Instagram users through some of the biggest names in the entertainment industry.

Among those who have featured Airbnb sponsored content of their public profiles are Mariah Carey, Lady Gaga, Drake, Kendrick Lamar and Channing Tatum. Airbnb has already delayed their IPO due to fears of an Uber contamination spooking investors – it is often called the Uber of holiday rentals – so they will be anxious to avoid losing any credibility on other fronts.