The product streams of mineral sands can be classified into two categories, namely:

Titanium Minerals - These include ilmenite, leucoxene and rutile, which are primarily used as feedstock for the production of titanium dioxide pigment. A small percentage is also used in titanium metal and fluxes for welding rods and wires. Titanium dioxide, due to its non-toxicity, brightness and high refractive index, is the most widely used white pigment. It forms an essential component of consumer products like paint, plastics and paper.

Zircon – Zircon has its own set of uses, the most important being ceramic tiles, which accounts for more than 50% of global zircon consumption. Other applications of zircon include refractories, foundries and speciality chemicals. It comes with certain unique properties, including heat and wear resistance, hardness, opacity, stability and strength.

Iluka Resources Limited (ASX: ILU) is primarily engaged in the exploration, project development, mining operations, processing and marketing of mineral sands. In an announcement to the exchange on 11th June 2019, the company reported a change in the interest of a substantial shareholder, Sumitomo Mitsui Trust Holdings, Inc and its subsidiaries, wherein the voting power has decreased from 9.71% to 8.46%.

In another announcement dated 06th June 2019, the company notified that it has signed an agreement with International Finance Corporation (IFC) to initiate a strategic partnership in relation to its Sierra Rutile operation. As a part of the agreement, IFC will acquire a 10% stake in Sierra Rutile for US$ 60 million. The partnership with IFC is directed towards the Sembehun deposits that contain the majority of Sierra Rutile’s remaining ore reserves and development. The deposits have the potential to positively impact the life of Sierra Rutile’s operations.

For the quarter ended 31st March 2019, the production, sales and revenue for zircon/rutile/synthetic rutile were lower than the previous quarter, largely due to kiln outage and shipping delays slipping into April. 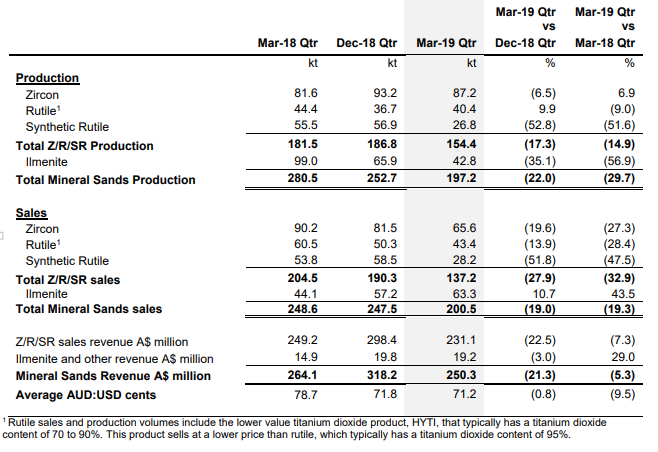 Mineral Commodities Ltd (ASX: MRC) engages in mineral sands mining and processing and conducts exploration and evaluation of mineral resources. On 30th May 2019, the company notified the exchange with the final Director’s Interest Notice for Colin Ross Hastings being a registered holder of 650,000 fully paid ordinary shares. In January 2019, MRC Exploration Australia Pty Ltd, a wholly-owned subsidiary of Mineral Commodities entered into a term sheet with Mr. Angelo Levissianos for the acquisition of a dwelling package in an area known for lithium-tantalum rich pegmatites.

Tormin’s Operational Performance: In the quarterly activities report for the period ended 31st March 2019, the company recorded Run of Mine production of 742,587 tonnes compared to previous quarter production of 779,209 tonnes. The unit cash production costs also increased significantly in comparison to the prior corresponding period. The unit production cash costs during the current period amounted to US$71.81 per tonne for 75,974 final concentrate as compared to US$53.98 per tonne for 95,024 final concentrate. Final concentrate production was impacted by lower mined ore grades. Sales revenue during the period amounted to US$14.9 million as compared to US$9.4 million in the prior corresponding period, owing to shipment of 53,610 wet metric tonne ilmenite concentrate during the period. The company stated that the demand for its zircon/rutile concentrate is expected to continue.

It is the highest concentrate grade being sold to China and continues to attract premium pricing. The company expects the overall revenue for the June quarter to be aligned to the March quarter results. 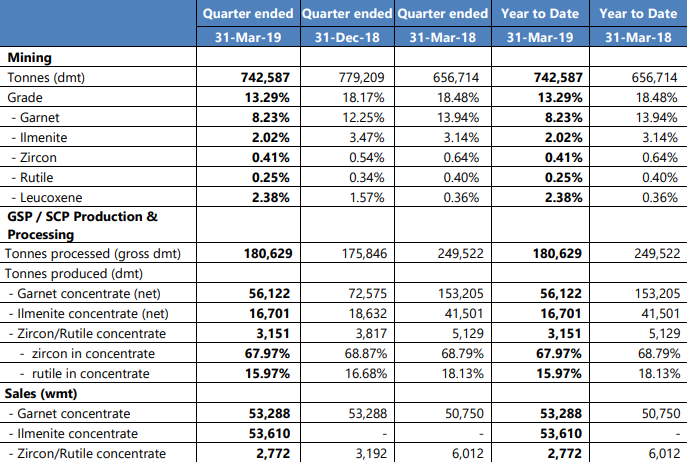 Furthermore, inventories of work-in-progress and final concentrate finished goods remain strong and will support the future shipments and operating cash generation. The balance sheet depicted cash as on 31st March 2019 of US$11.1 million and borrowings of US$4.5 million.

Base Resources Limited (ASX: BSE) is primarily engaged in the operation of 100%-owned Kwale Mineral Sands Operation in Kenya. In an announcement to the exchange on 17th May 2019, the group informed the exchange of a change in substantial shareholding of FIL Limited and its entities, wherein the voting power of the shareholder changed from 6.22% to 7.22%.

In another announcement, the company updated investors on its mineral resource at the Kwale North Dune Deposit, which has the potential to add mine life to the company’s existing Kwale Operations. The Mineral Resource estimate for the North Dune is 171 million tonnes at an average HM (heavy mineral) grade of 1.5%. It contains 2.6 metric tonnes HM based on a 1% HM cut-off grade. The company will commence a study to estimate the viability of any mine life extensions.

Currently, the Kwale operation is based on the Central Dune and South Dune deposits with mining operations focused on Central Dune. The North Dune was acquired by the company in mid-2010 as a part of the Kwale Project but was excluded due to the prevailing economic conditions and the basis of grade.

In the quarterly activities report for the period ended 31st March 2019, Base Resources released the pre-feasibility study for the Toliara mineral sands project, which is considered to be a world-class mineral sands project. In June 2019, the company also planned to relocate the mining operations of the Kwale Mineral Sands Operations to South Dune orebody. In April 2019, drilling of the Vanga exploration license for further mine life extension has also begun.

In the quarterly operations report for 31st March 2019, the company notified a substantial increase in resource for the Mannar Island heavy mineral sands project in Sri Lanka. The total Inferred Resource at the project is of 53.08 million tonnes at 6.7% total heavy minerals (THM). The increase in the resource was about 300% of the value reported in the previous resource statement. The resource is also said to be comprised of a new high-grade zone of 9.85 mt at 9.06% THM.

To introduce a further resource update in mid-2019, drilling on the Mannar project had commenced in the month of March, which was said to address the lateral and below water table extensions to existing resources, infill drilling on high-grade portions of the existing resources and to test new target areas on the tenure. The company also began a scoping study to address the project on the basis of operating and capital estimates and potential offtake markets, which is anticipated to take 12 months to complete. 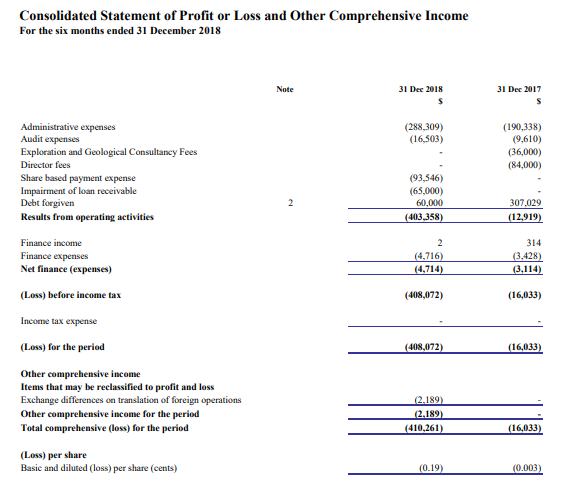