Retirement planning generally means the procedure of establishing retirement income objectives and the related actions, and the required decisions to attain the objectives.

For more understanding on the same, we will be having a look at the three ASX-listed retirement focused companies such as Challenger Limited, Class Limited and Lifestyle Communities Limited:

As notified on 22 January 2020, Challenger Limited and its entities has ceased to become a substantial holder in Virtus Health Limited (ASX: VHT) effective 20th January 2020.

Rise in Asset Under Management

The company, in October 2019, updated the market with performance of first quarter of financial year 2020 and outlined the following:

The following picture provides an idea of 2020 financial calendar: 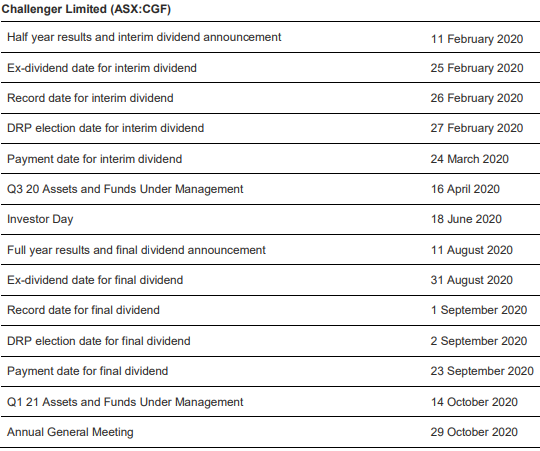 Class Limited (ASX: CL1) is engaged in the development and distribution of cloud-based software solutions from more than a decade now.

The company recently via a release to the market has proposed to issue 5,291,000 fully paid ordinary shares on the proposed issue date of 31st January 2020.

In another release, on 28 January 2020, the company notified the market with the update for December 2019 quarter where the total accounts have been increased by 2,600 with 1,576 customers currently using Class. It added that the class portfolio has witnessed a rise of 670 accounts. The company continues to load accounts onto Class Trust during the pilot phase and is happy with the results of external research which confirmed a strong appetite for the product.

The company in November 2020 announced that PricewaterhouseCoopers has been appointed as auditor of the company. In another update, the company announced that it has appointed Mr Mark Blackburn for the role of independent Non-Executive Director, which came into effect from 1st December 2019.

On the FY19 operational front, the company made acquisition of two additional sites, which are situated at Plumpton and Tyabb. The company also acquired additional land in order to expand its development at Wollert.

The company has continued to develop its people, systems as well as processes for supporting future growth, while maintaining its exceptional organisational culture as well as customer centricity.