BINGO Industries Limited (ASX: BIN), established in 2017 and headquartered in Auburn, Australia, offers waste management and recycling solutions to domestic and commercial businesses across the country.

The company recently presented at the Macquarie Australia Conference in Sydney in May 2019, emphasising on the Dial a Dump acquisition, the network redevelopment program and its five-year strategy and market update.

On 25th March 2019, BINGO Industries informed the market that it had completed the acquisition of Dial A Dump Industries (DADI) following the satisfaction of certain regulatory requirements associated with the Australian Competition and Consumer Commissionâs (ACCC) terms. The ACCC approval was sought in late February 2019 after submitting a court-enforceable undertaking to divest BINGOâs recycling facility in Banksmeadow, New South Wales.

DADIâs principal asset, situated in the Western Sydney, is the Eastern Creek recycling and landfill facility which covers ~ 55 hectares and has an approved capacity of up to 2 million tonnes per annuum (tpa), with ~ 15-year of useful landfill life remaining. The acquisition is expected to be transformational for BINGO. The value consideration was ~ $ 577.5 million (enterprise value as announced on 21 August 2018). It was partially funded by a $ 425 million underwritten Entitlement Offer at $ 2.54 per share and the issue of 78,740,154 BINGO shares to the vendors at $ 2.54. 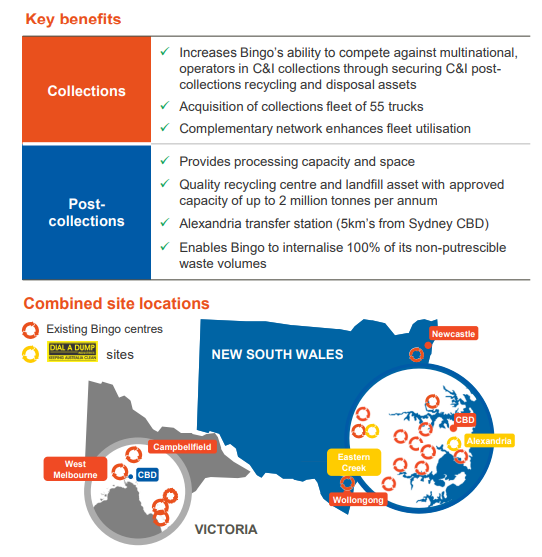 Going forth, at the core of the companyâs five-year strategy is its strategic network of waste infrastructure assets in primary locations of Melbourne and Sydney. So far, BINGO has completed a capital expenditure investment of $ 140 on Bingoâs initial network upgrade program. It is largely completed with earnings expected to flow from FY20.

Besides, as a result of the network reconfiguration and DADI acquisition, Bingoâs network capacity (RRC and landfill) would be higher, around 4.7 million tpa by FY2020.

The company recorded a 25.4% growth in net revenue to $ 178.7 million and a 4.1% rise in underlying EBITDA to $ 45.6 million for the half-year of FY19 to 31 Dec 2018. However, A faster than anticipated softening in multi-dwelling residential construction activity in NSW and Victoria, a no price rise in FY19 and reconfiguration of the companyâs development projects, have together contributed to reduced full-year guidance for FY19 ending 30 June 2019.

Though, the outlook for BINGO remains positive as its underlying business remains on track to achieve its revised FY19 EBITDA guidance that is broadly in line with the previous year (15%-20%).