Infrastructure includes energy, logistics transportation, ports, airports, and telecommunications. A shortfall in infrastructure capabilities is usually not fulfilled by acquiring goods from overseas or imports and is fulfilled by expanding capabilities & promoting development. A classic example can be roads that cannot be imported.

21st century started when capital markets were going through a recovery phase, which was brought by the technology burst, and till date technology continues to play an important role in our life. Technology infrastructure is developing rapidly, and it would continue to develop, as we become more sophisticated and needful.

Three Australian infrastructure stocks under discussion are as follows:

APA Group operates energy infrastructure in Australia. Its gas transmission pipelines are present in each state & territory on mainland Australia, transporting approximately half of the nationâs gas usage.

Recently, the group has entered into a non-binding Memorandum of Understanding (MOU) with Emperor Energy Limited (ASX: EMP) to agree on the scope and commercial framework for the provision of midstream infrastructure & services related to gas that would be produced from the gas field owned by Emperor Energy. In addition, the group is convening its Annual General Meeting on 24 October 2019 in Sydney, Australia.

In September, the group released its Annual Report for the period ended 30 June 2019. In its Chairmanâs Report â Mr Michael Fraser highlighted the achievements of the group for the period.

In FY 2019, the group continued to pursue its largest-ever organic growth program that has seen over $1.4 billion in energy infrastructure delivery in the past three years. The group had $21 billion of assets owned or operated, leveraging those assets to deliver over $1 billion in operating cash flow annually.

He said that the companyâs former CEO & MD â Mr Mick McCormack, was instrumental in making the group a leading business for fourteen years. Mr McCormack retired in July, and the group announced Mr Rob Wheals as CEO and Managing Director.

Recently, the company released unaudited production for September 2019. Accordingly, the energy sale from the Smithfield OCGT was 5GWh. Smithfield OCGT is a gas peaking facility, and it is expected that annual capacity utilisation to be in the range of 2-8%, with significant variation in output anticipated from month to month.

In early October 2019, the companyâs 25MW/52MWh battery at Lake Bonney in South Australia achieved energisation and full AEMO registration, and the battery is expected to be fully-commissioned in H1 FY20.

In September 2019, the company notified that 2019 Annual General Meeting had been scheduled to be held on 21 November 2019 in Sydney.

Brickworks is a testament of the Australian heritage with a history dating back to the Great Depression of the 1930s. Presently, it is one of the leading building material manufacturers, helping Australians to build their infrastructure.

In September 2019, the company has reported that the approval was secured to develop Industrial Land at Kemps Creek, Sydney. Accordingly, the companyâs Joint Venture Property Trust â 50:50 with Goodman Group (ASX: GMG) received the necessary approval from NSW Department of Planning, Industry and Environment. 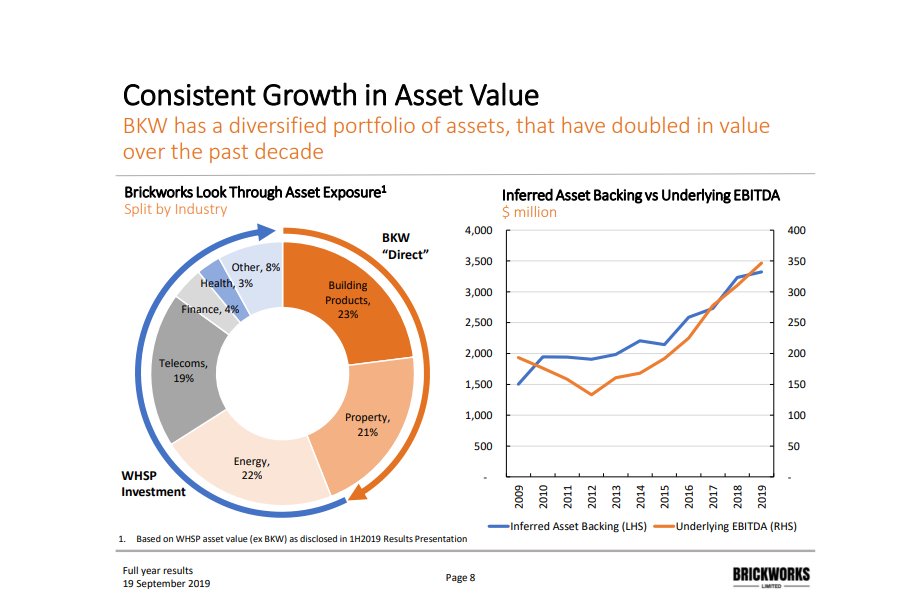 In addition, the company secured necessary permits for the Western North-South Link Road that would provide connectivity through to Lenore drive, and the M7 & M4 motorways. It was also said that the JV has grown to become a property trust with assets over $1.7 billion over the past ten years.

The approval also includes the Western North-South Link Road that would provide swift access from Estate to Lenore Drive, and the M7 & M4 motorways. The JV has demonstrated significant growth over the past 10 years, and it has asset worth- over $1.7 billion across western Sydney & Brisbane.